Sumit Shinde, Pratik Lad and Parth Bhalerao's comic timing will make you hit the replay button on your screen. 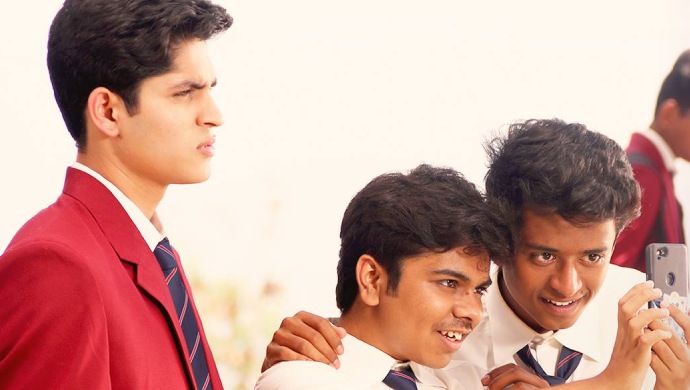 Boyz, the star of the award season, has successfully created havoc at the box office by breaking records. The credit goes to the chemistry between Sumant Shinde, Pratik Lad and Parth Bhalerao’s characters take the movie to a remarkable level. Even after it is over, you are left to think about serious topics like single parenting and farmer suicides.

Luckily, our Boyz and the supporting actors leave you wanting for more after you watch the film

If you have loved this Marathi film just as much as us, then, let’s exchange notes on which scenes made you ROFL!

You know both of them are mismatch right from the start. However, when they go on a date, the hilarity unfolds, along with their lack of chemistry. Remember when Grace orders Italian Chocoshok, Dhungya’s reaction is exceptional. The best comes when Grace talks in her British accent which is incomprehensible to Dhungya.

When the principal introduces Dhungya and Dhairya to everyone you know something big is about to go down. As soon as, the duo takes the stage, the comedy unfurls with Dhiungya’s broken Hindi. The expression on the teachers’ faces is noteworthy.

All of us have been naughty in our school days, but Dhungya and Dhairya’s guts are terrific. When they, along with Kabir, are caught by Namdev at the principal’s office, they frame Namdev and shoot him with darts for their crime. The whole encounter between the two parties is hilarious.

4. Dhungya’s chat with his girlfriend

Dhungya and his girlfriend’s video call had me rolling on the floor and laughing. The girl’s melodrama from the other end and Dhungya’s tongue in cheek sense of humour were relatable to all of us.

When the teacher tries to discipline Dhungya and Dhairya by asking them to do a handstand, he turns his punishment into an enjoyment session. Looking at the duo enjoying their get-together outside the class, other boys want to be punished, too!

The cast along with their comic timing gave an impeccable timing. We would love to know which is your favourite scene in the film!

If you love watching movies, you can check out more streaming on ZEE5.

Vartul: How Excited Were You To See Meenakshi Trap Vikram In His Own Plan?