Nachiket tells the Ketkars that they should learn how to use a computer, to carry out the business smoothly. 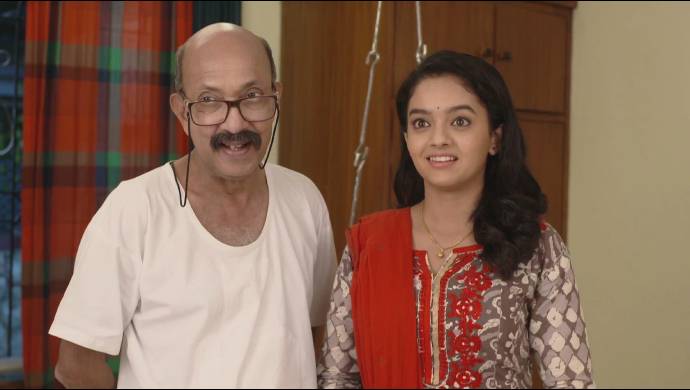 In tonight’s episode of Almost Sufal Sampoorna, we see Ajji and Kalpana teasing Sai by telling her that it’s time for her to get married. Sai blushes listening to them. Meanwhile, Appa is thinking about more strategies that can help expand their business. At that moment, he receives a call which makes him furious and orders Sai to hurry downstairs. When Sai and other family members reach and ask Appa about what’s wrong, he tells them that he had received a call from Pardeshi Exports. He adds that Jhanjhane Bai informed him that it is very difficult to bridge the communication gap as Appa still doesn’t know to use email. She tells Appa that henceforth all their communication shall be done through email or else they will cancel all the deals that have been done. Appa tells Sai that since she is educated and knows how to use modern gadgets and hence, she should handle all the communication aspects of their business here on.

At night, Nachiket reaches Sai’s home and tells everyone that they should learn how to use a computer. This will help in the smooth and efficient functioning of the business and there won’t be any glitches. All the family members agree with the same but no one is ready to take the initiative as everyone is busy in their own work. Appa decides to find a solution for this problem and he tells Nachiket that Sai shall work with him in communication and other business aspects. Nachiket is more than delighted to hear this. He immediately accepts Appa’s proposal.

After reaching home, our daredevil Nachiket calls Ketkars on their landline. When Appa picks up the phone, he tells him that he wants to talk to Sai. Appa happily agrees to let him do so. Nachiket pranks Sai and tells her that he is coming to their place to talk about their marriage. Sai is shocked and helpless as to what to tell Nachiket in front of all the family members. The next morning, the two go for a walk. He tells her that everything was planned in a way which would make Appa make her work with him. Sai gets shocked and tells Nachiket that he is unbelievable.

Is this the new chapter in Sai and Nachiket’s love story? Find out on Almost Sufal Sampoorna. In the meantime, don’t forget to catch your favorite shows streaming on ZEE5.