Appa gets romantic with Ajji and indulges in some sweet talks with her. Detail inside. 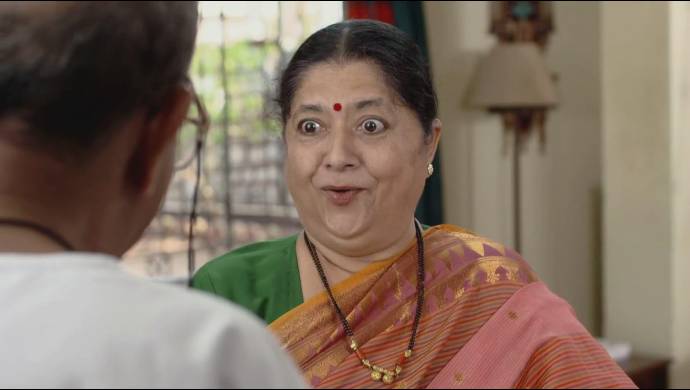 In tonight’s episode of Almost Sufal Sampoorna, we see people celebrating Teddy Day and Appa is annoyed looking at the way people are expressing their love by giving each other a bear. Everyone in the Ketkar house is frustrated with Appa’s behavior as they are not allowed to express their love freely. On the other hand, Nachiket is planning to gift Sai a teddy bear and he also encourages Digs to gift Richa something romantic.

Sai is in a rush to meet Nachiket and she tells the same to Ajji. The latter gets thoughtful, assuming that now that Appa has given Sai permission to work with Nachiket, the two will be meeting regularly. This also worries her, since the couple is young and shouldn’t take any wrong steps in their relationship. Ajji tells herself that she needs to keep the couple in their limits. Before leaving to meet Nachiket, she bumps into Appa. The latter inquires about why couples are gifting each other teddy bears. Sai explains to him, saying that it is a sign of love. Appa angrily replies, saying that all this is inspired by western culture and is stupid. Finally, Sai reaches Nachiket’s office and is amazed to see the beautiful infrastructure. Nachiket makes her sit on the chair and tries to flirt with her. Later, they go for lunch to a nearby restaurant.

On the eve of Teddy day, Appa also tries to flirt with Ajji. He surprises her by telling her that she will inaugurate their new shops. He also requests her to dress the way, she was dressed during their wedding day. Ajji starts blushing and is overwhelmed by Appa’s words.

It’s time for us to leave Nachiket and Sai aside and focus on Appa and Ajji’s chemistry on Almost Sufal Sampoorna! Stay tuned. For more entertainment, watch popular Marathi serials and latest movies streaming on ZEE5.

Almost Sufal Sampoorna 12 February 2020 Preview: Why Does Sai Throw Away The Teddy Bear?