In Almost Sufal Sampoorna, Appa cunningly takes the money which Mr. Pardeshi had given to Nachiket. 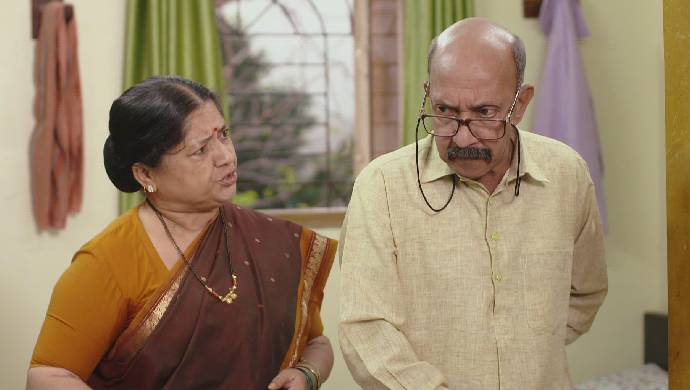 In tonight’s episode of Almost Sufal Sampoorna, Mr. Pardeshi comes to the Ketkars’ house to inform them about their first order being a success. He asks about Nachiket but Appa coyly diverts the topic, without informing Mr. Pardeshi, that Nachiket doesn’t stay with them anymore. Innocently, Mr. Pardeshi places Nachiket’s remuneration in Appa’s hands, since the latter promises to give the money to him (Nachiket). Everyone from the Ketkar family is shocked seeing Appa’s greedy and dishonest behaviour. After Mr. Pardeshi steps out of the house, he coincidentally bumps into Nachiket. They both go to the latter’s house for a chat.

During Nachiket and Mr. Pardeshi’s conversation, the latter informs him about Appa taking Rs. 10000 of Nachiket’s share. After hearing this, Nachiket is disappointed in Appa’s behaviour and confesses that he is never going to get the money back. Then, Mr. Pardeshi offers Nachiket 20 per cent partnership in his business. The latter immediately accepts it, on the condition, that they will make the Ketkar business boom. Later, Nachiket gives this news to his friends, who congratulate him for this big achievement.

On the other hand, Appa is reprimanded by Ajji for his bad behaviour towards Nachiket. However, he isn’t willing to accept his mistake and tells Ajji to leave the house if she has a problem with him. Ajji walks out of there and speaks to her daughters-in-law about this argument. Meanwhile, Appa seeks validation from Sai for his decision of throwing Nachiket out of the house. She comes under pressure, and accepts that he made the right decision.

Like Vartul Actress Rujuta Dharap, Transform Your Grandmom's Saree Into A Dress