Appa and others are excited about the inauguration of their new shop. Later, Appa gets a call from Zanzane Bai, which spoils his mood. 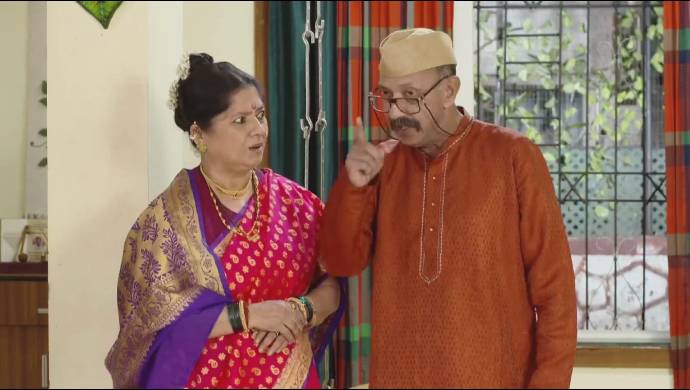 In tonight’s episode of Almost Sufal Sampoorna, Chinmayananda tries to tell Appa that there was a teddy bear in the house and that he played with it. However, Appa thinks that Chinmayananda must have dreamt about it and he ignores him. Meanwhile, Mansi apologises to Shailesh, by telling him that she has lost the teddy which he had gifted to her with so much love. Shailesh does not know what she is talking about and finds her behaviour weird. Later, he clears things with her, saying that he had never sent any teddy bear to her.

Meanwhile, Sai is quite upset, knowing that she has lost her beloved teddy bear and informs the same to Nachiket. The latter assures her that it’s okay, as their relationship just got saved from another danger. The next morning, everyone is getting ready for the inauguration of their new shop. Later Sai gets a call from Nachiket, who reminds her that it is their first valentine and that he wants to meet her at any cost. Meanwhile, Appa and Ajji flirt with each other. He tells her that she is looking exactly the way she looked during their wedding. Ajji also tells him that he looks handsome, however, he has become bald now. The other couples of the family also indulge in romantic chats, appreciating each other’s dresses and looks.

Later, Appa receives a call from Zanzane Bai. She tells Appa that they should appear in formal clothes for the product presentation. She adds that their Indian traditional clothes will not be accepted and that they should also reach on time. Appa gets annoyed but has no choice but to obey Zanzane Bai’s orders.

5 Ways To Stop Your Food Cravings And Get A Body Like Saajana’s Pratap!

5 Times Ankush Was The Troublemaker On Saajana