The Ketkars inaugurate their new shop in a traditional manner. Later Sai and Nachiket go to celebrate Valentine's Day. 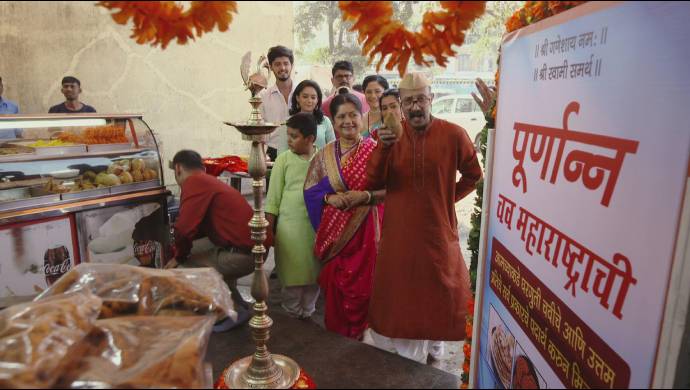 In tonight’s episode of Almost Sufal Sampoorna, we see that everyone in the Ketkar family is excited as they get ready for the inauguration of their new shop. All the members are dressed to impress. Appa is very tensed, regarding the product presentation. When Ajji asks him about why he looks so disturbed, Appa tells her that there is a big conference, being attended by all exporters of Mumbai and as instructed by Zanzane Bai, there should be a representative from the Ketkar family. He decides to send Sai for the seminar.

Later, Nachiket walks into the house to inform Appa about the conference. Appa informs him that Sai will be attending it. He also tells Sai that she has to wear a western outfit for this conference. Sai is shocked knowing that Appa has allowed her to wear western attire. Appa and others leave for the inauguration, and Sai is left behind with Nachiket. She learns that all this was planned by Nachiket, so that they can spend time together. When Sai comes downstairs wearing a western outfit, she looks very uncomfortable. Seeing Sai this way, Nachiket tells her to wear whatever she wishes to.

The Ketkar’s reach the shop. Appa informs the workers to take out the ribbon as it is a western culture to cut the one during inaugurations. They end up inaugurating the shop in a traditional way. Everyone is delighted and happy. The family members light the lamp, one after the other, as per Indian traditions.

Meanwhile, Digs tries to give a rose to Richa, telling her that she is very special to him. Richa tries to ignore him but Digs requests her to take the rose. She in turn, tells him to close his eyes. Digs close his eyes, expecting something special to happen, only to find out that Richa has fooled him and slipped away from there. Appa and Ajji return home with Chinmayanada, while Sai and Nachiket go out to celebrate Valentine’s day.