In Almost Sufal Sampoorna, Ketkars decide to not interact with Appa until he lets them talk to Nachiket. 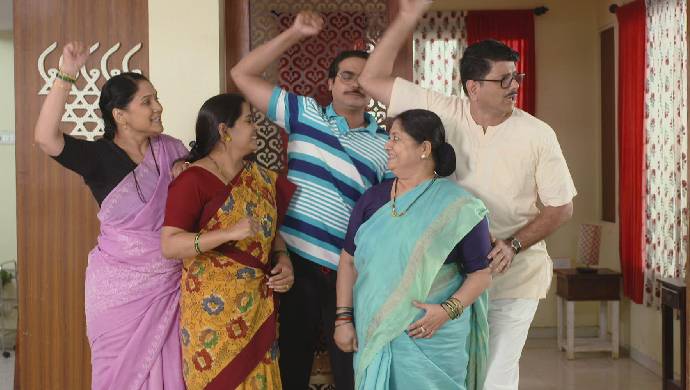 In tonight’s episode of Almost Sufal Sampoorna, Nachiket and his friends are flying kites on the ocassion of Makar Sankranti. During this, Digs tries to get close to Richa who shuts down his advances. As everyone is busy enjoying, Nachiket dreams of Sai standing next to him. Then, Nachiket gets a call from Mr Pardeshi who asks him to go for some work to Gujarat. On the other hand, Sai is miserably alone at her own house. She can’t stop crying and thinking about Nachiket. She decides to go to Nachiket’s house to confront him.

Sai comes on Nachiket’s house terrace. She tells him that they need to talk and takes him downstairs. Sai asks Nachiket to leave this house and go far away from her. He tries to convince her to stop behaving this way but she is too scared of Appa. Nachiket, then, asks Sai if she truly wants him to go far away. Sai nods her head while crying and walks out of there. Nachiket calls Mr Pardeshi and tells him that he is leaving for Gujarat right away. He informs this to Digs and asks the latter to keep this information to himself.

At the Ketkar house, Ajji has decided to stop talking to Appa until he doesn’t let the whole family interact with Nachiket. She reveals this decision to Sai. Ajji also promises Sai that she will bring her and Nachiket closer. Meanwhile, Appa gets irritated knowing that his whole family is supporting his enemy and protesting against him.