In Almost Sufal Sampoorna, Sai and Nachiket decide to go for a morning walk, since Appa isn't there. 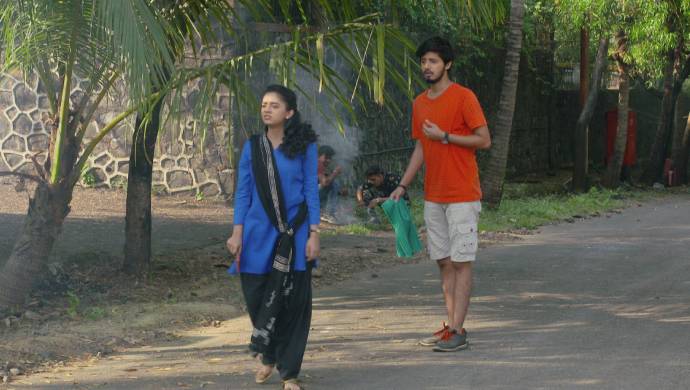 In tonight’s episode of Almost Sufal Sampoorna, Sai and Nachiket, along with their mutual friends, brainstorm on ideas to redecorate the latter’s house. He’s in favour of sticking posters of his favourite Australian cricketers on the wall, but Digs is against it. The gang has a debate over this topic. Meanwhile, at Sai’s house, her family tries to convince Appa, to launch their products in the international market. However, he’s against this idea. He makes it clear to them that he isn’t going to give or take anything from the foreigners.

At night, Nachiket has trouble sleeping, due to Appa’s constant snores. He decides that he doesn’t want to sleep next to the latter. Nachiket tries to call Sai but she doesn’t answer his calls. He goes to her bedroom, which she’s sharing with Ajji. Nachiket throws an earring at Sai, and wakes her up. They both start whispering, which disturbs Ajji. Nachiket quickly hides, before she can spot him.

Then, the two-step outside the room and discuss their plan of going for a morning walk, the next morning. During this, Appa wakes up and the noise from his room scares Sai and Nachiket, who shut their eyes and hug each other. Luckily he doesn’t see them and they both are saved. The next morning, Appa doesn’t come for a morning walk with Nachiket. The latter takes this opportunity and decides to call Sai. After a lot of persuasion, Sai agrees and they both go for a walk together.

Saajana: Will Raosaheb Keep Aside His Ego Accept Rama In His Family?