While celebrating Valentine's day, Nachiket and Sai spot Mansi and Shailesh at the same restaurant. Details inside. 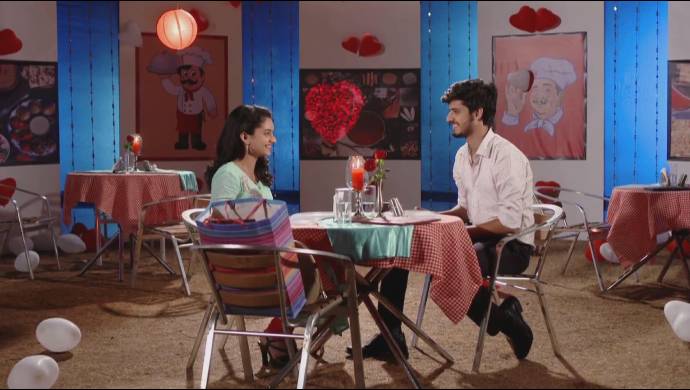 In tonight’s episode of Almost Sufal Sampoorna, we see Nachiket buying a diamond ring for Sai on the eve of Valentine’s day. He immediately informs this good news to his best buddy, Digs. The latter is delighted to know this and asks Nachiket for some tips, so that he can also make Richa fall in love with him. Sai who is in the shop, finds that Mansi and Shailesh have also entered the same shop, and she immediately informs Nachiket about the same and tells him to stay alert.

The couple get saved and heave a sigh of relief as Mansi and Shailesh fail to spot them. They then plan to hang around with each other and later, have dinner at a fancy restaurant. During dinner, the couple shares some lovely romantic moments with each other. After some time, Nachiket gives her a ring, and this makes Sai emotional. Nachiket requests Sai to say ‘I love you’ on such a special occasion. When she is about to say the three magical words, Nachiket spots Mansi and Shailesh. The latter are happy to see them and join Nachiket and Sai at their table, for dinner. Nachiket tries to hint that he wants to be alone with Sai, by telling Mansi and Shailesh to be seated at a better table but the latter don’t catch on.They happily accompany Sai and Nachiket and stay on toll the end of the couple’s meal.

After having dinner and returning home, Nachiket tries to spend some time with Sai by taking her to his place. He tells Mansi and Shailesh that he has to give some urgent printouts to Sai and for that, she has to come to his place. Mansi and Shailesh happily agree to move on and tell Sai to finish off her office work with Nachiket. Later, he tells her that he truly loves her and expresses his feelings for her. However, Sai is quite upset, as she has lost her favorite teddy, which was gifted to her by Nachiket. To make her smile again, Nachiket tells her that he has bought another gift for her.

5 Reasons Why You Should Watch Nagraj Manjule’s Fandry

What do you think is Nachiket’s special gift for Sai? Find out on Almost Sufal Sampoorna. Meanwhile, for more entertainment, check out the latest episodes of your favorite TV shows streaming free on ZEE5.

Doctor Don 18 February 2020 Preview: Deva Finds Himself In A Dilemma