Ajji spots Sai and Nachiket spending some romantic time outside her house and lashes out at them for the same. 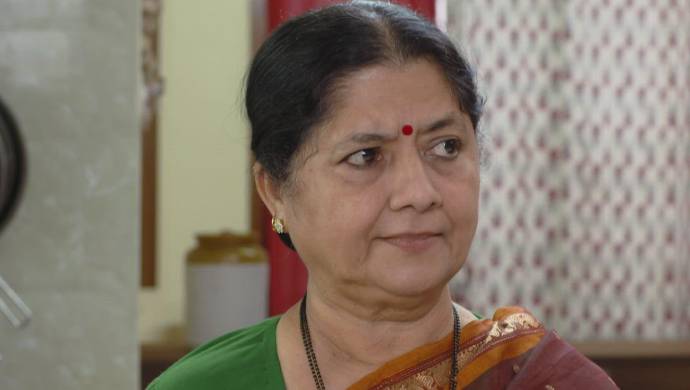 In tonight’s episode of Almost Sufal Sampoorna, we see that after celebrating Valentine’s Day, Nachiket comes to drop Sai to her place. At the gate, when Sai is about to leave, Nachiket catches her wrist and pulls her close to him. He asks her to give a peck on his cheek to end their day on a romantic note. Sai is shy at first but gives him a quick peck and runs away, blushing.

While Sai and Nachiket are sharing some romantic moments, Ajji is looking at them from the balcony. She is  annoyed and disgusted with the young couple’s actions. As soon as Sai reaches home, Ajji catches hold of her and asks her about her irresponsible behaviour, despite several warnings. Sai tries to justify her innocence by telling Ajji that she knows her limits and she will not cross them at any cost. While Sai is explaining her stance, Ajji spots the ring on her finger which Nachiket had gifted her. Ajji is of an orthodox mindset and tells Sai that she has no right to wear the ring before marriage. She immediately snatches the ring from her and rushes to Nachiket’s place to return it.

Nachiket tries to explain to Ajji that Sai and he truly love each other. Ajji informs him that she has no problem with their love but is very concerned about their actions. Ajji is also worried about the fact that their actions can harm the image and reputation of the Ketkars. Ajji angrily returns the ring to Nachiket and warns him to behave responsibly henceforth. He says he understands her concern and agrees to act with caution here on.

The next morning, Shailesh advises Appa that they need to advertise their new shop in the newspaper and for that, they need to invest some money. After learning about the huge amount that will be needed for advertising, Appa is furious and refuses his proposal. Then, Shailesh tells Appa that they can tell Nachiket to help them in advertising. Appa believes that Nachiket is intelligent and also can advertise the new shop, free of cost. Later, Sai is seen pacifying Ajji, as the latter is still angry with her.

Will destiny let Sai and Nachiket meet again? Will Ajji be fine soon? Find out only on Almost Sufal Sampoorna.

Meanwhile, watch the latest web series and your favorite shows on ZEE5

5 Pics Of Devdutt Nage Aka Doctor Don That Will Motivate You To Hit The Gym Right Away!