Zanzane Bai informs Appa that a person who knows English from his family should accompany Nachiket to Gujarat. Ajji shows her concern. 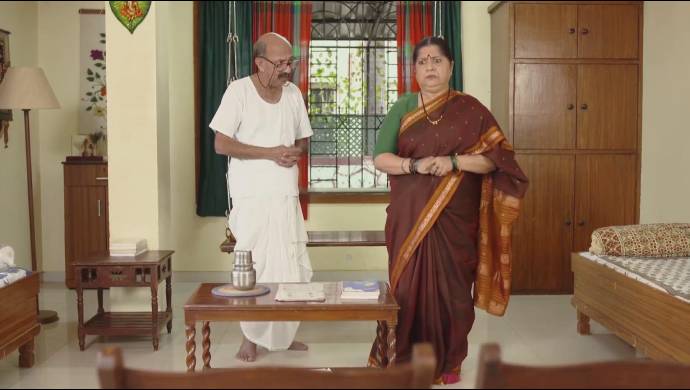 In tonight’s episode of Almost Sufal Sampoorna, we see Shailesh advising Appa that they can take Nachiket’s help in creating ads for their new shop. Appa is more than happy when he comes to know that Nachiket is the right person person for the job, as he won’t be charging them any money. Appa immediately calls Nachiket and asks him to come and meet him. Nachiket is overjoyed to meet Appa, thinking that he will get to see Sai once more.

Ajji is quite nervous knowing that she’s going to be the face of the campaign and out of curiosity, asks Kalpana whether she will have to do makeup, for the ad. Kalpana encourages her by telling her that not only will she get to do makeup but will also get to wear beautiful sarees. After some time, Nachiket comes to meet Appa. The latter tells him that they need his help to create an ad for their new shop. Nachiket happily agrees and promises that he will provide them whatever help is needed. Later, Appa gets a call from Zanzane Bai stating that someone from the Ketkar family needs to go along with Nachiket to Gujarat to meet the client. She also puts forth the condition that the person should be fluent in English. Appa requests for some time from her, so that he can manage something.

Meanwhile, Sai is very upset knowing that Nachiket won’t be in town, for two days. Nachiket explains to her that it’s just a matter of two days and he will leave from Gujrat as soon as he finishes off the work. Later, Appa tells Sai that she has to go with Nachiket to Gujarat to meet the client. Sai is super excited to hear this. However, this time, Ajji shows concern and questions Appa on how he allowed Sai to go with Nachiket. She insists that Appa  allow her to tag along with the couple, but he refuses her request and tells her that Nachiket can take care of Sai very well.

Will Ajji convince Appa to let her accompany the couple to Gujarat? Find out only on Almost Sufal Sampoorna.