Ajji and Sai travel to Gujarat to meet Nachiket. 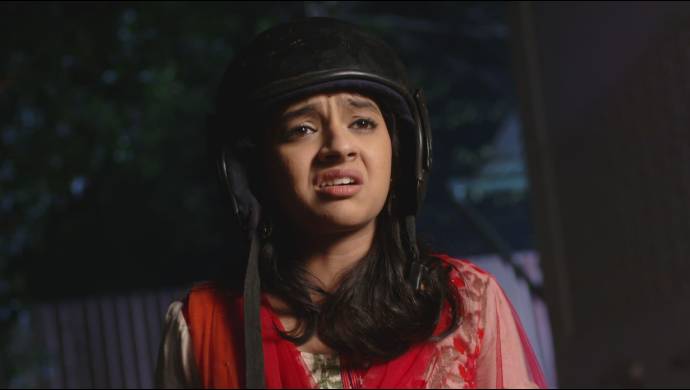 In this episode of Almost Sufal Sampoorna we will see how Ajji plots a plan to go to Shirdi with Sai by pretending that there is a calling from Sai Baba. Everyone questions the two about the last minute plan, however, Ajji answers them tactfully. Kalpana, as usual, starts her storytelling but is interrupted by Ajji claiming that they need to leave because there is calling from Baba. While leaving Ajji informs Kalpana that she has ended the taciturn with Ajoba and they too can start talking with him.

Ajji has something else in her mind and for that, she has also called Digs and Richa with their bags. Meanwhile, waiting for Ajji, Digs leaves no stone unturned to impress and help Richa. While getting coffee for Richa, Digs argues with the tea vendor on not having change not knowing that Ajji is standing right behind him. After realising the same he gets scared and keeps blabbering. All three knew that they were going to Gujarat except Sai. But when she comes to know that they were going to Gujarat to meet Nachiket and not Shirdi her happiness had no boundaries. Digs casually asks Ajji about how did she come to know about Nachiket being in Gujarat when Ajji tells that she came to know from Richa.

They all begin searching for Nachiket but miss the opportunity to meet him due to some reasons. They reach a godown where they expect to meet Nachiket only to find that he has left for Mumbai just a few moments back. They decide to meet Nachiket in Gujarat itself but the car fails to start. Ajji asks for keys of a bike from one of the workers working over there. Sai doesn’t give a thought and rushes to meet Nachiket on the moped leaving behind her phone in the car. Meanwhile, at home Appa feels uneasy and worried about something. It is dark by now and Sai after going on some distance finds the moped not working in the middle of nowhere. She feels helpless, as the vehicle doesn’t start and also doesn’t have her phone to inform about her situation.

What do you think will happen next? Let us know your thoughts in the comments below!

For more entertainment, check out the latest releases on ZEE5.

Watch Date With Saie If You Enjoy Thrillers