Is Sai in trouble? Who is the stranger? Find out! 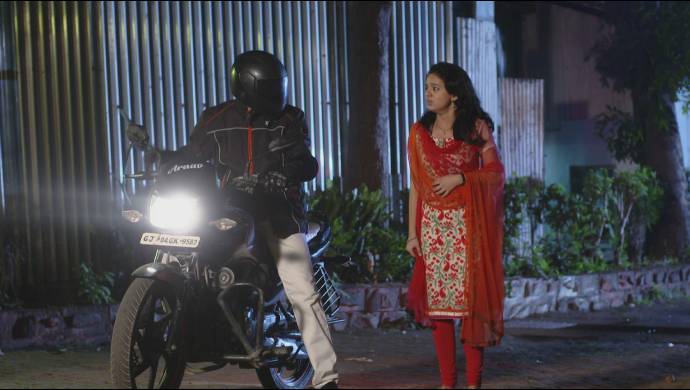 In today’s episode of Almost Sufal Sampoorna, we see Sai in trouble, as her moped stops working in middle of nowhere. It is quite dark, and she feels helpless,  as she has forgotten her phone in the car. Ajji, Digs, and Richa are worried about her safety, and try calling her, only to realise, that Sai has left behind her phone, in the car. Ajji blames herself for all this, as she had lied, saying that they have left for Shirdi.

Watch the latest episode of Almost Sufal Sampoorna below:

After many unsuccessful efforts, Sai decides to push the vehicle. After having traveled some distance, Sai’s worst nightmare comes to reality. Some goons on a bike, begin to tease her, by whistling at her and passing dirty comments. A scared Sai starts warning the goons, not to come close to her, but in vain. She somehow manages to escape from there and starts running on a deserted road. The goons follow her like wild dogs. At that time, a stranger arrives on a bike and asks Sai to hop on. Sai hesitates at first but then eventually, does as she is told. After covering some distance, a frightened Sai asks the stranger, about where are they heading and that she wants to get dropped at Sunshine hotel. To this, the stranger nods in agreement and drops her at her location.

After reaching the hotel, Sai thanks the stranger for his help. She narrates the whole incident to the stranger and tells him that she is new to the city and is searching for her friend. She thanks him once again, before leaving. As she makes her way to go, the stranger calls out her name. Sai doesn’t take even a second to recognise the voice, as it is of Nachiket’s, her love. She can’t believe her eyes and hugs him tightly. She also gets upset with Nachiket for leaving, without telling her and starts hitting him in anger.

Prem Poison Panga: Whom Do You Support – Mr Bhole Or Mrs Bhole?

Finally, all of them meet over dinner at a dhaba and enjoy the meal, over a lengthy conversation, as they catch up. Sai inquires about how Nachiket came to know that she is in trouble. He explains that he bumped into Ajji, Digs, and Richa unexpectedly, and came to know about her. He says that he immediately rushed to find her, and reached at the right time, to help her escape. After dinner, when everyone decides to leave, Ajji takes Sai and Nachiket aside, to have a private conversation with the two. She tells the couple that their relationship won’t be accepted by Appa at any cost because Nachiket is a foreigner. The latter asks Ajji about reasons behind Appa’s hatred towards foreigners, to which Ajji replies saying that she says it’s due to certain events, that occurred in their past.

What could have happened? Stay tuned to find out! Catch all the episodes of Almost Sufal Sampoorna, streaming for free on ZEE5 here.