In Almost Sufal Sampoorna, Nachiket apologises to Sai for not contacting her when he was in Gujarat. She decides to accept his apology. 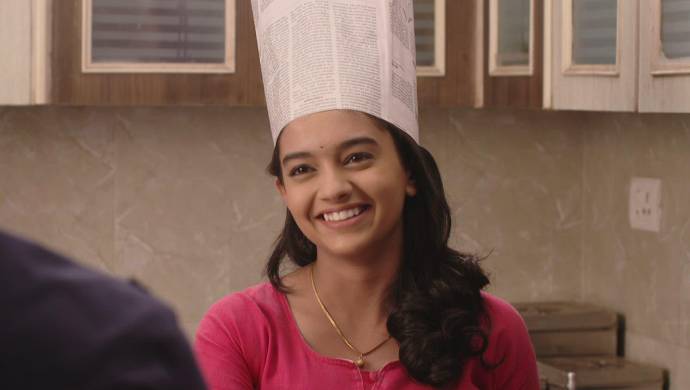 In tonight’s episode of Almost Sufal Sampoorna, Nachiket returns home, late in the night, after his Gujarat trip. He calls Sai to open to door and she does so but doesn’t give any reaction. He tells her that she is overreacting just because he wasn’t able to message her. Hearing this, Sai breaks down and explains to Nachiket the events which transpired in his absence. She tells him that they heard about the bus accident and presumed that he was travelling through the bus. After he didn’t contact them for over a day, everyone in the Ketkar family panicked. Sai, while crying, holds his collar and asks him why he behaved this way. Nachiket then apologises to her for behaving carelessly.

Sai accepts Nachiket’s heartfelt apologies and forgives him. He, then, asks her to make some pohe since he is craving the dish. They both go to the kitchen and Nachiket cooks delicious pohe for Sai and him. As they are enjoying it, Sai attempts to try on the earrings which he got for her from Gujarat. However, Appa comes to the kitchen and she hides the earrings. He asks Nachiket to come with him for the morning walk, but the latter is too tired. Instead, Sai goes with Appa while Nachiket informs the Ketkar family about his opinion of the foreign exporter’s godown.

Later, in the day, Nachiket and his friends are redecorating his house. Sai comes and he can’t stop staring at her. Then, they both start painting the walls of the house. Meanwhile, at the Ketkar house, the ladies hope that Appa gives his permission to launch their products in the foreign market.

Can You Guess Who Is Hruta Durgule’s Celebrity Crush?