Nachiket calls Appa 'Hitler' and hides in Sai's room. Appa wants to find out who is teasing him and he enters Sai's room to check the same. 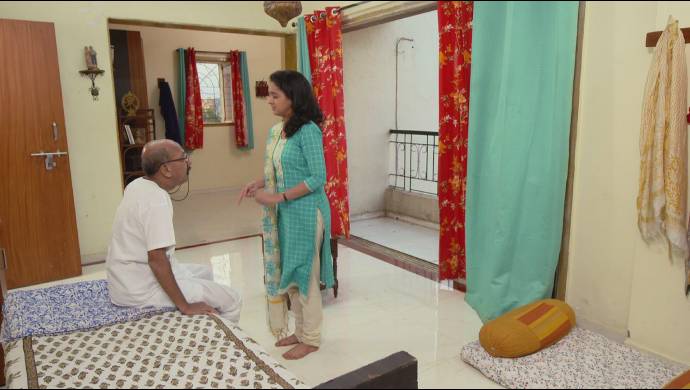 In this episode of Almost Sufal Sampoorna, we see Nachiket and Digs reach near Sai’s house, and find Appa taking his walk in the lawn. They make a plan to distract Appa, so that Nachiket can go inside the house and meet Sai. Digs acts dumb in front of Appa, and tries to distract him with his antics. He does so by him calling him Hitler. Appa gets suspicious about his behaviour and starts yelling at him. Hearing this, Ajji comes out and tries to sort out the argument. Meanwhile, amidst all this, Nachiket quietly slips inside the house and reaches Sai’s room.

Watch the episode of Almost Sufal Sampoorna below:

Finding Nachiket in her room, Sai is shocked, but delighted, at the same time. Both of them share some wonderful moments with each other, as they indulge in an endless chat and reminisce about past times. As they are doing so, Appa calls out to Sai. Hearing this, Sai runs downstairs to figure out what’s wrong with Appa and why he’s furious with Digs. Sai comes to know that Appa has heard Digs calling him Hitler, and somehow convinces him, that the latter is dumb and cannot speak. Appa is still irritated and he decides to go upstairs to spend some time alone.

While coming upstairs, Nachiket, who is hiding in Sai’s room,calls Appa ‘Hitler’ and hides. This frustrates Appa even more and he tries to get into Sai’s room, to find out who is calling him Hitler. Sai rushes to stop Appa but fails. Appa decides that he will not move out of the room, until he figures out the mystery.  Sai tries to convince Appa, by telling him that someone must have called him Ketkar and not Hitler. But a stubborn Appa denies listening to her. She tries to keep Appa away from Nachiket, who is hidden behind the curtains in the room. He holds Sai’s hand making difficult for her to move, while Appa repeatedly tells Sai to switch on the fan. Finally, Appa looks at Sai, confused, as to why isn’t she moving.

Best Of 2019: Most Romantic Scenes From Zee Yuva Shows That Warmed Up Our Heart

Almost Sufal Sampoorna: Will Nachiket Stop Sai From Getting Married To Someone…

Will Appa find out that Nachiket is hiding behind the curtains? Find out on Almost Sufal Sampoorna streaming on ZEE5.

Almost Sufal Sampoorna 25 January 2020 Preview: Nachiket In Trouble, Will Sai Save Him?