Sai tries hard to convince her mother Kalpana to let her perform on stage. However, she refuses to do so. 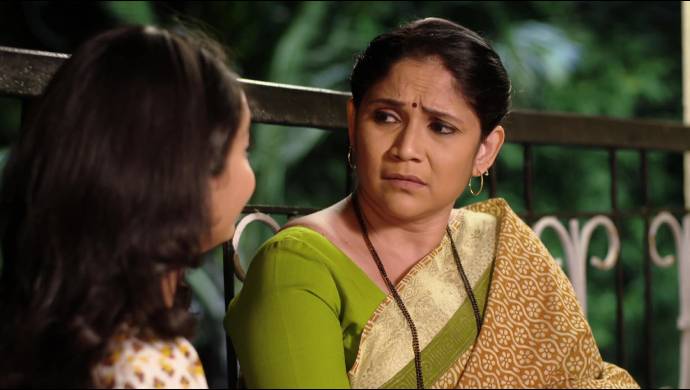 In tonight’s episode of Almost Sufal Sampoorna, we see that Sai isn’t able to gather the guts to go against Appa’s principles. Nachiket encourages her by advising her to convince the rest of her family members. This will certainly help her prove the majority against Appa. Sai gets convinced and decides to follow Nachiket’s idea. In return for helping her, Nachiket asks Sai to give him a peck on his cheek. Sai acts mischievous and asks Digs to do the needful. Nachiket is totally disgusted after getting kissed by Digs. Later, he decides to help Sai practice her dance.

After reaching home, Sai starts playing her tricks. She indulges in sweet talks with her mother by appreciating her looks. Later they start discussing Sai’s marriage. During this conversation, Sai’s mother tells her to have all the fun she can before marriage, as once she ties the knot, it will be very difficult for her to follow her heart. Sai immediately expresses her wish to perform a dance act on stage. Looking at Sai’s eyes filled with passion and hope, her mother decides to give it a thought. Sai is more than delighted to see this. The next morning, as soon as Sai wakes up, she asks her mother about her final decision regarding her dance performance. Sadly her mother asks Sai to first seek Appa’s permission and only then can she can perform on stage. This leaves Sai worried and tense.

On the other hand, Appa is quite disturbed by the incident involving Jholkar, which nearly landed him in jail. He is ashamed of himself for the wrongful decision of finalising a business deal with a fraudster like Jholkar and so, he refuses to talk with Ajji and others out of embarrassment.

Coronavirus: Here Are Some Things You Can Do At Home Inspired By Sai, Monica And…

Will anyone in the family lend their support to Sai? Stay tuned and find out only on Almost Sufal Sampoorna.

Get Inspired By Nikhil Damle, Karan Bendre's Desi Style To Dress Up This Gudi Padwa!