Sai goes to meet Zanzane Bai at their office to resolve the rejected consignment issue. However, Zanzane Bai ignores Sai and keeps her waiting. 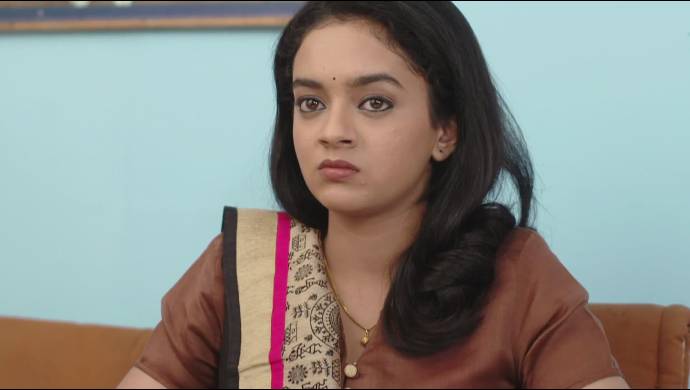 In tonight’s episode of Almost Sufal Sampoorna, we see that Sai reaches  Pardeshi Export office to ask Zanzane Bai, why has their company rejected Ketkar’s products. Zanzane Sai tells Sai to wait as she is very busy. She purposely keeps Sai waiting for long. Dhotre advises Sai to speak with Nachiket directly and solve the issue, but Sai insists that she will wait for Zanzane Bai to get free.

Later, Dhotre informs Nachiket that Sai is waiting in the office for a long time. Nachiket immediately asks Sai to sit in his cabin but Sai tells Nachiket by calling Mr. Deshpande, that she wants to talk to Zanzane Bai. Nachiket inquires to Zanzane Bai when is she planning to meet Sai, to which Zanzane replies that she is busy with some urgent work and will talk with Sai later.

Finally, its lunchtime. Dhotre couldn’t see Sai helplessly waiting. He asks Zanzane Bai to have a word with Sai as it would take just a few minutes. However, Zanzane Bai shouts at Dhotre and tells him that he should not tell her what to do. Nachiket convinces Sai to come to his cabin. He asks Sai why is she acting weird. Sai furiously complains about Zanzane Bai to Nachiket. Nachiket tries to calm her down Sai but she tells Nachiket that being the business head he is of no use. Sai also tells Nachiket that he lacks the calibre to keep his employees disciplined.

Later, Sai calls Appa and informs him that she’ll get late to come home as she has not met Zanzane Bai yet. Appa gets furious at Zanzane Bai. Sai calms him down and tells him that it is their fight and they will have to fight it on their own. Appa asks Sai to wait till she meets Zanzane Bai and resolve their issue. Sai too agrees with Appa.

Will Zanzane Bai meet Sai or she will give some excuses to ignore her? Find out only on Almost Sufal Sampoorna.