Nachiket manages to escape from the clutches of Appa. However, he is still not satisfied with his meeting with Sai. Find out in detail inside. 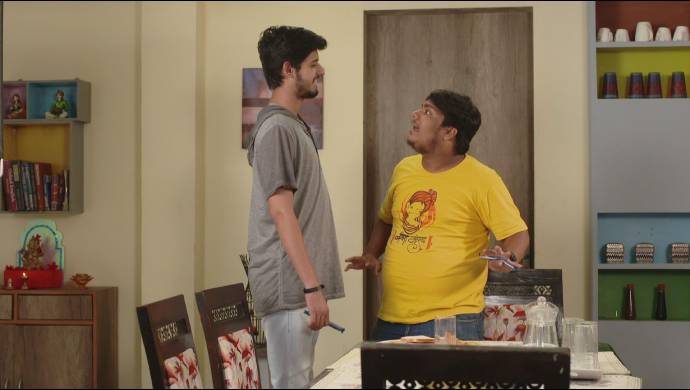 In this episode of Almost Sufal Sampoorna, we see that Digs, after helping Nachicket reach Sai’s room, returns home. He is very hungry and searches for food everywhere in the house. After trying a lot, he doesn’t find anything and decides to call Nachiket on his phone. Meanwhile, Nachiket is still hiding in Sai’s room and Appa has decided that until he finds the person who called him hitler, he won’t leave the room.

A hungry Digs loses patience and calls Nachiket on his phone. The latter’s phone starts ringing,and hearing this, Appa gets alerted and asks Sai if she too, can hear the phone ringing. Sai starts panicking and right at that moment, Ajji enters the room to convince Appa, that she was the one who was calling him from downstairs. A stubborn Appa still wants to inquire about the same. Sai claims that it was her phone which was ringing, but Appa says he knows her phone ringtone and it was not the same. Sai finally manages to convince Appa, claiming that she has changed her phone ringtone. Ajji takes Appa downstairs, who still is in his detective mode.

Watch the episode of Almost Sufal Sampoorna below:

Nachiket finally manages to escape and after reaching home, is quite angry on Digs, about his childlike act and forces food inside his mouth. Nachiket tells Digs that because of him, he could have gotten caught by Appa. A shameless Digs says that he was hungry and hence decided to call Nachiket, without giving it any thought. Nachiket is speechless after hearing all this and is quite sad, because he didn’t get enough time to spend with Sai. Just like a true friend, Digs motivates Nachiket that the day is not over yet and he still can meet Sai. Listening to this, Nachiket gets an idea.

The next morning, before leaving for work, Nachiket says goodbye to Sai, by secretly coming near her house. In office, Dhotre introduces Nachiket to Jhanjhanit Bai, who is the senior supervisor of the company, and soon, they all get on with their work.

Just 10 Stylish Pictures Of Sai Tamhankar To Kickstart Your Day With!

What do you think Nachiket will do now, to meet his love again? Find out on Almost Sufal Sampoorna streaming on ZEE5.

Watch Your Favorite Stars With Their Adorable Pets