After overcoming the Jholkar situation, Appa decides to start afresh. He asks Nachiket for his support and guidance. Find out in detail below 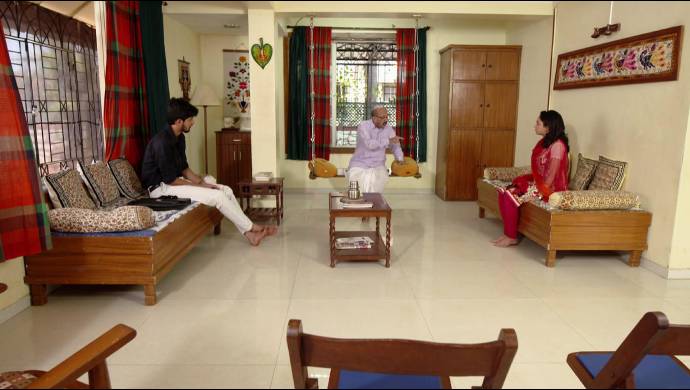 In tonight’s episode of Almost Sufal Sampoorna, we see that Appa is embarrassed and disturbed after the incident that involved him and Jholkar. Nachiket, as well as other family members, had tried warning him repeatedly but his egoistic and stubborn nature led him to facing a problematic situation. Seeing Appa disturbed, Ajji starts asking him questions. Appa tells her that he desperately wants to win the ‘Marathi businessman of the year’ competition and he can go at any extent to do so. Ajji finds him simply impossible. She advises him to talk to Nachiket as he is the right person to consult in this matter. Surprisingly, Appa agrees to do the same.

After some time, Appa asks Nachiket to meet him as he wants to talk about the competition. Nachiket sarcastically tells Appa that he should ask Jholkar for advice. Appa embarrassingly apologises to Nachiket and asks for his guidance.

Nachiket comes to Appa’s place to discuss about the competition. He tells the old man not to rush into taking any decisions. Further, he assures Appa that he will help him win this competition. To help Nachiket, Appa tells Sai to assist him in finding franchisees to expand their business. The couple is super delighted after hearing this but manages to control their emotions in front of Appa.

Later, to help Sai practice her dance, Nachiket decides to surprise her. While leaving home, Sai takes her mother’s blessings and thanks her for lending her support. As soon as Sai meets Nachiket, the latter closes her eyes and takes her to Phulwa Tai’s place. Seeing this, Sai’s happiness knows no bounds. However, she still isn’t sure if she is doing the right thing. Nachiket encourages her to follow her heart and worry about nothing.

After reaching his office, Nachiket immediately starts the work of finding a franchisee for the Ketkars. He asks Dhotre to talk to his friend Chatre, and ask if he is interested in partnering with Appa.

Coronavirus: Here Are Some Things You Can Do At Home Inspired By Sai, Monica And…

Watch Videos: Sai, Deva, Jui Have Important Messages For You On The Coronavirus…

Will Nachiket be successful in helping Appa win the competition? Stay tuned and find out only on Almost Sufal Sampoorna.

Doctor Don: Here Are 5 Reasons Why We Love Deva And Monica's Equation