Nachiket feels helpless and asks Sai to come to his place so he could clear all her misconceptions. More details below. 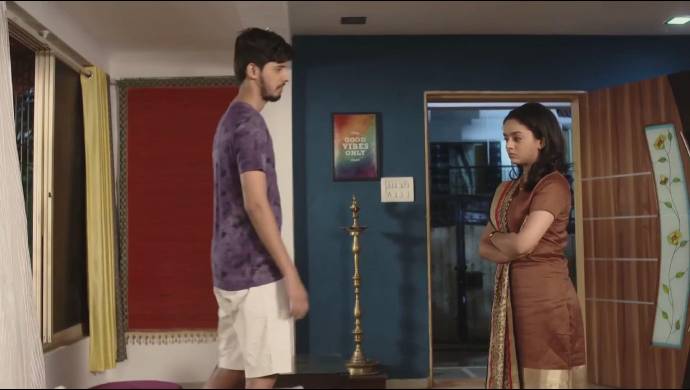 In tonight’s episode of Almost Sufal Sampoorna, we see that Appa is very furious at Zanzane Bai and decides to meet her immeditely. Ajji, however, stops him and convinces that Sai will surely resolve this issue by herself. Ajji calls Nachiket and informs him to use the power of his designation and ask Zanzane Bai to talk with Sai and resolve the issue. Nachiket feels like he is trapped in a dilemma and is helpless.

Later, Nachiket also asks Zanzane Bai why is she rejecting such a big consignment for such petty reasons and behaving arrogantly with Appa and other Ketkars. Zanzane Bai explains that Appa deserves to be treated like this as he has no sense of ethics while talking to others. Nachiket angrily tells Zanzane Bai not to get personal while doing business deals and because of her, the company can lose one of its big clients.

As soon as, Sai reaches home, Appa asks Sai to promise him that she will support him in teaching Nachiket and Zanzane Bai a lesson they’ll remember. Later, Richa meets Sai and tries to convince her that she should patch up with Nachiket as she does not see Nachiket’s fault in all this. Sai refuses to talk with Richa.

Nachiket is quite disturbed.  He calls Sai and asks her to come to his place as he wants to clear all the misconceptions. When Sai refuses, Nachiket tells her that if she doesn’t show up in the next few minutes he will reach to her place and talk to her over there. Sai angrily reaches Nachiket’s place.

Will Nachiket be able to clear Sai’s misunderstandings? Find out only on Almost Sufal Sampoorna

Meanwhile, watch the hilarious chemistry of Deva and Dr. Monica on Doctor Don and your other favorite shows on ZEE5.