Sai is shattered after not getting support from her family members. And the constant worry and stress makes her faint! Details inside. 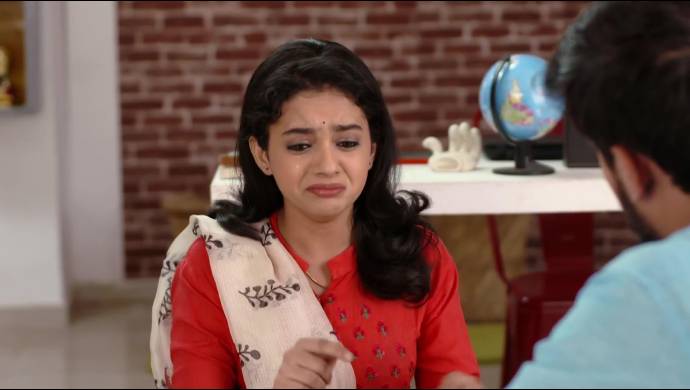 In tonight’s episode of Almost Sufal Sampoorna, we see Dhotre’s friend Chatre agreeing to deal with Appa and help him expand his business. Nachiket is very delighted and he decides to call Sai and tell her this good news. He tries calling her many times, but a disturbed and disheartened Sai is lost in her own thoughts and thus, ignores his calls.

At night, Nachiket reaches the Ketkars’ house. He comes to know that Sai has not reached home yet. Appa and Ajji tell Nachiket that Sai was supposed to be with him. Everyone gets really worried. An angry Appa starts blaming Nachiket for all this. Right at that moment, Sai comes home and rushes to her room without saying a word to anyone. Ajji asks Nachiket to talk to Sai and figure out why she is disturbed.

After some time, Sai reaches Nachiket’s place and starts crying. The latter inquires Sai about why she is so disheartened. Sai starts narrating the entire incident that took place at Phulwa Tai’s academy. She tells Nachiket that Phulwa Tai has come to know about their affair and most importantly, she has alerted and warned them to stop right away as Appa will never support their relationship. Nachiket tries to convince Sai but the latter tells him that Phulwa Tai’s warnings make sense. If she cannot seek permission from Appa to perform a dance act, how is she going to talk about their relationship to him. These thoughts start scaring the couple. However, as always, Nachiket tells her that everything will be fine and they just need to stay together, no matter what. He encourages Sai to speak to the rest of the family members. After thinking for a while, Sai gathers the guts and decides to talk to Appa.

The next day, there is a celebration of Gudi Padva at the Ketkars’ residence. Everyone in the Ketkar family along with Nachiket is super excited and are dressed in traditional outfits. Later, Sai tries convincing Ajji and others to let her perform a dance on stage but no one lends their support. An annoyed and helpless Sai reaches Nachiket’s home and tells him the entire incident. While narrating the incident, Sai faints!

Will she be alright? Stay tuned and find out only on Almost Sufal Sampoorna.

Looking For Ways To Entertain Yourself At Home? This Dance Video Of Nikhil Damle Will Help