In Almost Sufal Sampoorna,, when Appa is not looking, Sai is fed a piece of cake by Nachiket. 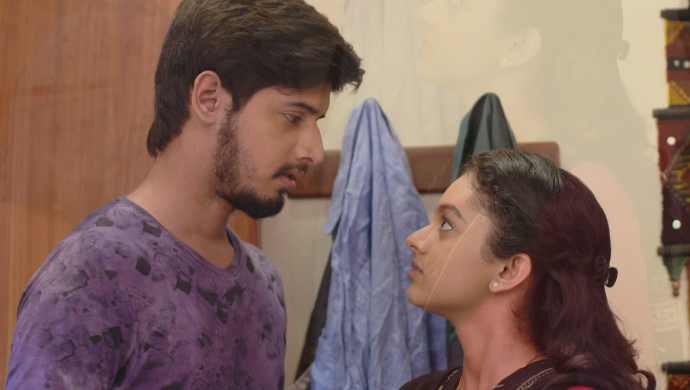 In tonight’s episode of Almost Sufal Sampoorna, we saw Appa reading a newspaper in the morning. While doing so, he comes across a picture of a Marathi celebrity cutting his birthday cake. He gets irritated and starts yelling, as he believes that people are forgetting their Indian roots and adapting to the western culture of cake cutting. Ajji comes and tries to placate Appa but in vain. Instead, Appa says he is happy that his family is not giving into western culture. Ajji consoles him saying that the Ketkar family would never eat cake.

At Nachiket’s house, Digs hogs half the cake that the former had gotten for everyone. As Nachiket is scolding him, Richa enters and they start talking about Sai. Richa congratulates Nachiket for getting Appa’s permission to let Sai help him with the redecoration of his house. Nachiket credits Sai for persuading Appa in this matter.

Meanwhile Appa attends a meeting with his lawyer. He pays the lawyer for helping him kick Nachiket out of the house. During this, Appa mentions that he has given Sai permission to help Nachiket redesign his house. The rest of the Ketkar family isn’t aware that Appa is in discussion with the lawyer. Appa has told his family members that the lawyer is an Ayurvedic doctor.

Later in the evening, Nachiket meets Sai and feeds her a piece of cake since she has Mehendi on her hands. A petrified Sai smiles and accepts Nachiket’s gesture.