In Almost Sufal Sampoorna, Appa wants to teach Nachiket a lesson, hence he takes the latter along with him for a walk. 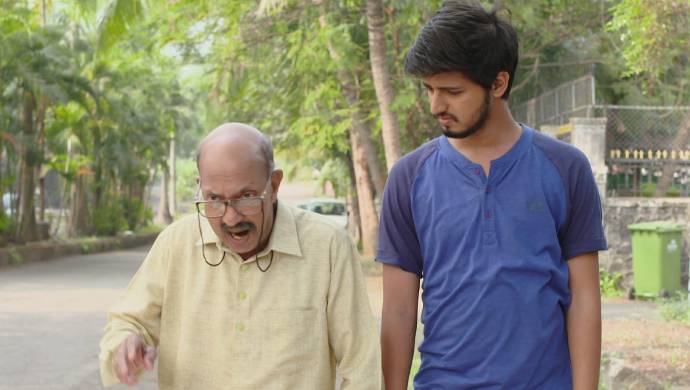 In tonight’s episode of Almost Sufal Sampoorna, Nachiket is staring at Sai’s picture on his phone. Appa interrupts to remind him of the morning walk, which they have to go the next day at dawn. He purposely takes Nachiket along since he wants the latter to get tired and leave the Ketkar house. The following day, Nachiket and Appa are walking on the road when the dogs start barking at Appa. Nachiket scares them as Appa hides. The duo continues their walk further during which they meet the lawyer whom Appa has consulted. Since Nachiket is around, Appa doesn’t talk to the lawyer much. Nachiket, who is aware of the lawyer, introduces himself. Appa tells Nachiket that he is an ayurvedic doctor, but the latter knows the truth.

At the Ketkar house, the ladies are worried about how Appa would be troubling Nachiket during their walk. Ajji is not able to have her tea and waits for her husband to come back home. Meanwhile, Sai sees Nachiket’s shirt’s button that is broken. Since he is not in the house, she takes the button replaces it with a new one and irons the shirt. During this Chinu comes and starts questioning Sai about Nachiket. But she doesn’t pay attention to him. Later, Nachiket spots Sai with his shirt and realises Sai’s concern for him. Sai, who gets caught, doesn’t know how to defend herself.