In Almost Sufal Sampoorna, Sai asks Nachiket to find out the meaning of the song which she told him. 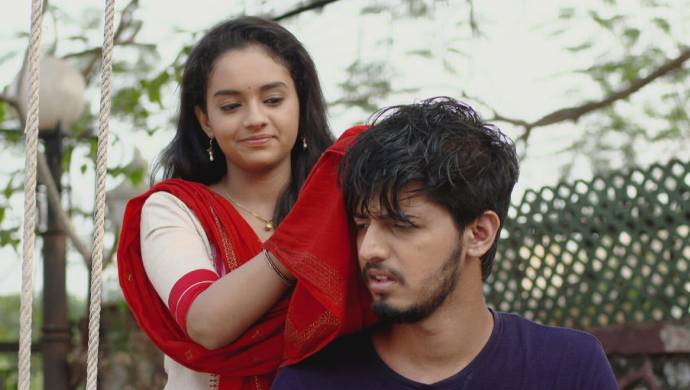 In tonight’s episode of Almost Sufal Sampoorna, Sai and Nachiket are spending time together in the garden. As Sai is watering the plants, she starts teasing Nachiket and sprays water on him. He completely gets drenched and starts scolding Sai for doing it. Hearing him throw tantrums, she starts laughing and tells him that he looks good this way. Then, Sai recites a few lines from a song which Nachiket doesn’t understand. He asks her the meaning behind it but she tells him to find it himself. Nachiket becomes upset and goes to Digs to ask for help. He remembers a few words which he tells Digs who doesn’t know the meaning behind the song.

Sai goes to the kitchen and continues saying the remaining lines while smiling to herself. Ajji, who is in the kitchen, hears Sai and compliments her for remembering this old song. Then, she asks her granddaughter about her changed behaviour. Ajji says that Sai is smiling a lot more lately and is seen to be happier. The latter starts fumbling and tells Ajji that there is nothing to worry about as everything is just the same. After some time, Nachiket calls Sai to explain her the song, but the latter refuses to do so.

Sai, then, goes to Nachiket house and starts scolding him for keeping it unclean. She starts cleaning his house and folding his clothes while being irritated. Nachiket apologises to her. Meanwhile, Ajji questions Appa about his changed behaviour but the latter remains coy about it. Appa says the atmosphere of the house is pleasant when Nachiket is around.