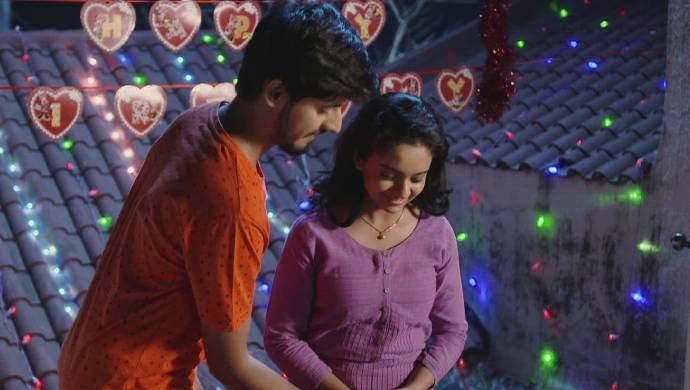 In tonight’s episode of Almost Sufal Sampoorna, Richa calls Nachiket to tell him that it is Sai’s birthday the following day according to the Hindu astrological calendar. On hearing this, Nachiket, who is trying to translate Sai’s song, decides to arrange a surprise for her. He speaks to Digs about it and the latter supports the idea. Nachiket suggests that, along with Sai, he is going to buy a gift for every member of the Ketkar house. Then, Nachiket goes to Sai’s bedroom and wakes her up. He holds his hand on her mouth to keep her from screaming. Sai is surprised to see Nachiket in the middle of the night sitting on her bed. He confesses to her that he wanted to be the first person to give her birthday wishes.

Nachiket and Sai go to the Ketkar family’s terrace. There, Nachiket has kept all the decoration ready. Sai is pleasantly surprised to see the preparations. She then cuts the birthday cake which Nachiket has brought for her. They both feed each other a piece of cake and share a moment. During this, Nachiket indirectly tells Sai how happy she makes him. Following this, he thanks her for cutting the cake for the first time on her birthday, just for him.

The following day, the Ketkar family feeds Sai sweets and gives her gifts. They all are waiting for Nachiket who is in his own house. After a while, Nachikey joins Sai’s family and gives them gifts. During this, Appa screams saying that they are not going to feed him and walks out of there. Everyone is silent seeing Appa’s sudden outburst.