Appa has no choice but to teach Nachiket Marathi. Will Nachiket be an obedient student? 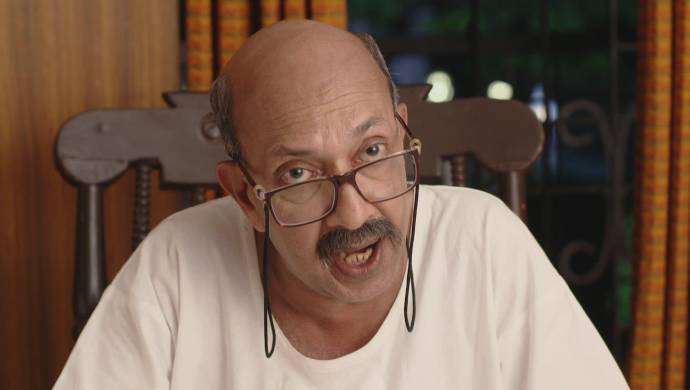 In tonight’s episode of Almost Sufal Sampoorna, Appa is having a meeting with the people of Marathi Mandal. These guests are keen on meeting Sai who has gone to see Nachiket. As they are inquiring about her, Sai reaches home to greet them. Appa starts boasting about Sai’s intelligence and her grasp over the Marathi language. Hearing this, the guests compliment Appa for being an inspiration to Sai since her childhood. They offer Appa the highest position in the Mandal for his Marathi speaking skills.

During the meet and greet, Kaku goes outside the house and calls Nachiket. She wants to inform him about Appa’s message of not entering the house until the guests are present. However, Nachiket doesn’t listen to Kaku and goes to the house as he is too thirsty. The Ketkar family tries to hide Nachiket from the guests but they fail. Nachiket approaches Appa’s guests and introduces himself in broken Marathi.

The guests frown upon hearing Nachiket’s Marathi which is mixed with English. They question Appa’s double standards and threaten to take away the position which they were offering him. Seeing this, Nachiket intervenes and tells the guests that he has only just started staying in the Ketkar house and Appa is his Marathi teacher. He asks the people of Marathi Mandal to give him two weeks to learn Marathi. The guests agree, on a condition that only if Nachiket learns Marathi, will Appa become the head of Marathi Mandal.

After the guests leave, Appa decides to throw Nachiket out of the house within the next two weeks. On the other hand, Nachiket prepares himself to get up every morning at 5.30 am to learn Marathi with Appa.

Saajana: Can Rama Make It To Her Exam In Time?