Ajji gave her blessings to her granddaughter and Nachiket to get married in Gujarat. We would love to hear from you about this. 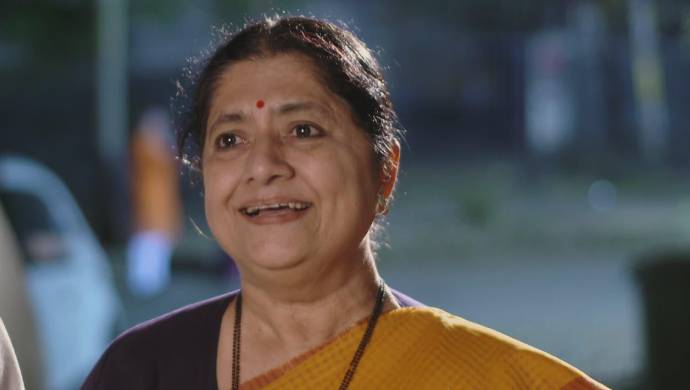 We recently saw how Ajji decided to break Appa’s rule and go to Gujarat along with Sai in Almost Sufal Sampoorna. This decision came in retaliation after Appa behaved cunningly with his whole family. Ajji wanted to teach Appa a lesson since he separated Nachiket from their family. After reaching Gujarat, Sai and Ajji met Nachiket who was finishing Mr Pardeshi’s work. Seeing Sai unexpectedly was a pleasant surprise for Nachiket since he never thought she would accept her feelings for him. Amidst their reunion, Ajji decided to marry Sai and Nachiket since Appa wouldn’t accept their love otherwise. Do you think Ajji is right in taking this brash decision?

It is only Ajji, from the Ketkar family, who knows about Sai and Nachiket’s feelings for each other. Being fond of Nachiket, she wants him to marry her granddaughter as she thinks he would make her happy. However, Appa doesn’t feel the same way about Nachiket since he comes from Australia. Due to his past bad experience with people from a foreign land, Appa hates Nachiket. Knowing the truth, Ajji wants to see Nachiket and Sai married in Gujarat while being away from their family. We think it is unwise for her to act impulsively as Sai’s parents would be hurt. If we give Nachiket some time, he can smartly change Appa’s heart. Although it would take time for Appa to see Nachiket from a fresh perspective, it is worth it.

Ajji and Nachiket have We would love to know your opinion on Ajji’s decision. Don’t forget to cast your vote and tell us your thoughts in the comments below.

Is It Right For Ajji To Get Nachiket And Sai Married Secretly?
Don't Miss

Prem Poison Panga: 5 Reasons Why Jui And Aalap's Separation Could Be Beneficial To Them