Sai decided to wear a dress which Nachiket gifted her. This is a bold step which Sai took considering Appa's hatred towards western culture. 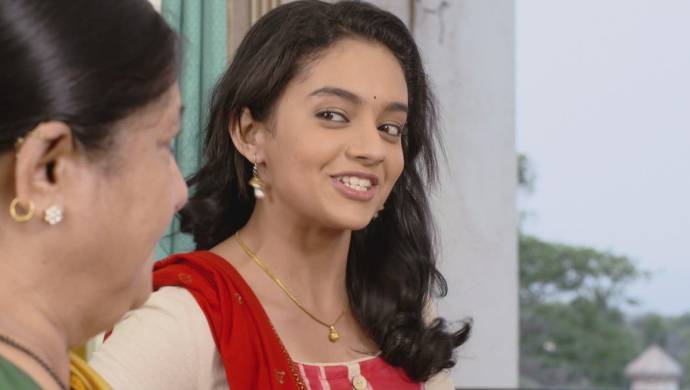 We can’t underestimate the influence which Nachiket has on Sai and her family in Almost Sufal Sampoorna. After coming to stay with the Ketkar family, Nachiket single-handedly showed them the flaws in Appa’s behaviour which they didn’t spot for all these years. He gave them the courage to put forth their opinions in front of Appa who earlier wasn’t tolerant of others’ views. Nachiket even drastically changed Sai’s behaviour and made her accept the modern world. Recently, Sai requested Appa to allow her to attend Nachiket’s New Year’s Eve party. Do you think Sai’s outlook is slowing changing?

Nachiket, who came from Australia, has an open mind. He witnessed the Ketkar family’s conservative thinking under Appa’s dominance after he started living in their house. Unlike the Ketkar family, Nachiket spoke up his unabashed views on Appa’s thinking. During his Christmas party, he invited Appa to celebrate the occasion with him. Even though the latter didn’t agree, Nachiket’s courage to take this step mattered. In fact, he even gifted Sai a dress which she decided to wear for the party. Although she was scared to wear western attire, she put  it on Nachiket’s insistence. It is commendable of Sai to take this step since she has never disobeyed Appa before.

We hope Nachiket strengthens Sai to take her own decisions and become independent. It’s been too long since she has been influenced by Appa who shuns the modern world. After reading this, we would love to know your opinion on Sai’s changed behaviour! Tell us your thoughts in the comments below.

Saajana: How Well Do You Know Rama And Pratap's Relationship? Take A Quiz!