Almost Sufal Sampoorna: Will Sai’s Kaku Find Out About Her Secret?

Sai's Kaku has threatened to reveal her secret to Appa. This shouldn't happen as it would break her friendship with Nachiket. 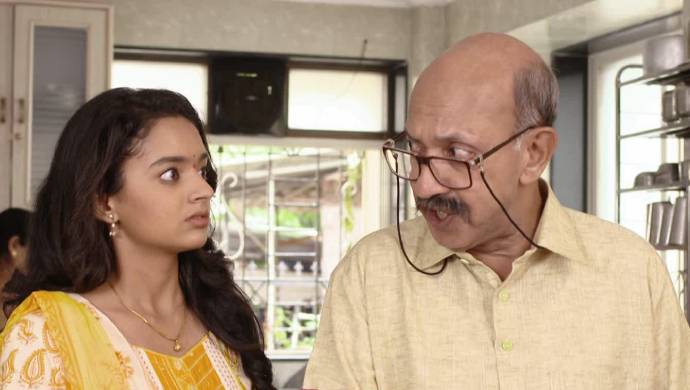 In Almost Sufal Sampoorna, no one from Sai’s family knows that she is going to Nachiket’s house to help him with his documentary. Just as we were beginning to think this is a well-kept secret between them, Sai’s Kaku has gotten to know that she is hiding something from the family. Kaku even threatened to reveal this to Appa who everyone is scared of. Do you think Sai’s secret will be out in the open?

We have enjoyed and laughed out loud when Appa fought with Nachiket. Their fights were nothing short of hilarious. However, we have to admit, like everyone else, we are scared of Appa, too. He scares us to the extent that we would never want Sai and Nachiket to be his target. Recently, Sai wanted to get dry fruits from her house to Nachiket’s to help him with the recipe that he was shooting. However, the things didn’t go as planned as Appa stopped her. Their plan was further complicated when Chinu, instead of Sai, went to give Nachiket the dry fruits.

Through Chinu, we are guessing Sai’s Kaku got to know that Sai and Nachiket are bonding. She threatened Sai that she will complain about this to Appa who hates Nachiket. After having a conversation with her Kaku, Sai decided that she will have to stop going to Nachiket’s house. If that happens, it will sadly ruin everything. As you read this, do you think everyone from the Ketkar family knows Sai’s secret? We would love to know your thoughts in the comments below.

You Can't Miss Watching The Award-Winning Movie 'Sairat' On ZEE5