Avani sees the design papers of Mrutyunjay bungalow going out of the house due to the wind. She decides to catch them else Kshitij will get angry. 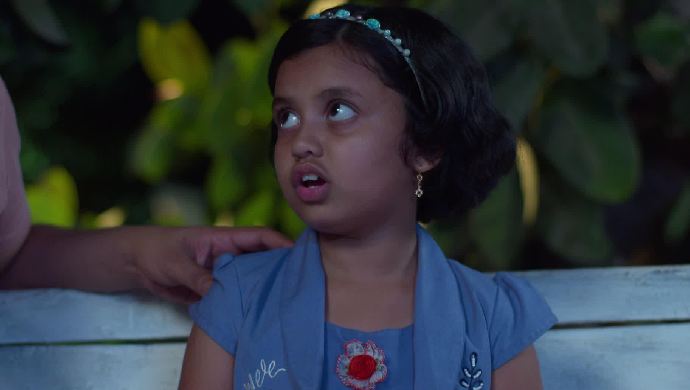 In the previous episode of Ek Ghar Mantarlela, Sameedha tells Kshitij that the walls of the bungalow do not allow her to paint them. He then tries to paint the walls and surprisingly it works. Seeing this, he starts laughing and asks to concentrate on her work. At home, Gargee comes near Mavshi and asks her to eat the apple and die with her. Hearing this, the latter gets scared and a moment later she realises that it was a hallucination.

In tonight’s episode, Avani asks Kshitij to play with her as she is getting bored. He tells her that he is busy with some important work and promises to join when he gets done with it. The little girl comes down and sees the design papers going out of the house due to the wind. Thinking that Kshitij might get angry at her, she tries to catch them.

A few moments later, Kshitij completes his work and calls Avani to have dinner. Getting no response from her, he comes downstairs and asks the maid about Avani. She tells him that she was playing in the house when she saw her a few moments ago. Both of them look for her in the whole house but fail to find her. When Kshitij’s brother comes home he gets shocked to know that Avani is missing.

Later at night, Gargee’s mother asks her if there is a lot of pressure at work. The latter agrees to it and tells her parents that due to Nilay’s absence she has to handle and manage everything which is a tough job. Her mother asks her about Nilay and when is he coming back. Gargee gets irritated tells her that she has no idea when is he coming back or where has he gone. She tells them that they are soon going to shoot another episode of their show and that too without Nilay. On hearing this, her parents get worried and ask her to postpone it till the time Nilay comes back but Gargee sticks to her decision.

While searching for Avani, the maid sees her sitting on the bench near the garden. Kshitij and his brother also come there and ask her what is she doing there. Kshitij notices the design paper of the Mrutyunjay bungalow in Avani’s hands. At night when little Avani is asleep, someone enters her room and calls her name.

Is Avani the next target at Mrutyunjay bungalow? Let us know your thoughts in the comments below.

Watch Uri: The Surgical Strike Based On the True Event Of Uri Attack