Nilay and Pakya try to get out if the bungalow but Jakhoba comes in their way. 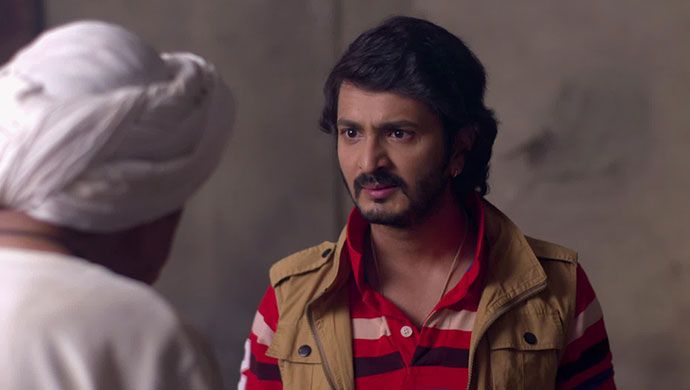 In the previous episode of Ek Ghar Mantarlela, Nilay finds the Kakan and immediately Mavshi comes there and asks him to throw it away. While he is about to throw it, he remembers that the real Mavshi would have never asked him to do so. He then turns around decides to keep it with himself. Later they find Pakya and are about to leave the bungalow. Dinesh gets an idea to take away the Kakan and give it to Sara to impress her.

In tonight’s episode, Dinesh walks out of Mrutyunjay bungalow with the Kakan which was protecting them all. The moment he steps out of the bungalow, the lights of the bungalow starts twitching. Seeing this Pakya gets scared and Nilay assures him that till the time they have the Kakan, they are safe. But the moment Nilay goes to get the Kakan he finds out that it is missing.

Pakya tells him that Dinesh might have taken it away. Both of them decide to move out of the bungalow and run downstairs. Just then Jakhoba stands in their way and tells them that they managed to run away the last time but they can’t do it again. He bangs his stick on the floor and both Nilay and Pakya fall unconscious. At home, Gargee is trying to call Nilay and is worried about them. She then decides to go to the Mrutyunjay bungalow and her Baba tells her that he will also accompany her.

After some time, Nilay wakes up and starts searching for Pakya. While he is in the bungalow he experiences many horrifying things like seeing his mother, team members dead. When he is about to go out of the bungalow, Gargee walks in and tells Nilay to search for Pakya and takes him into the storeroom. She then asks him to open the door of the cupboard. Remembering what he saw in the cupboard the last time, he refuses to do so.

A moment later, Pakya comes along with two guys and tells Nilay that when Jakhoba banged his stick the next moment he found himself on the road. And he thought that he should come back to the bungalow to take Nilay.

Will Nilay and Pakya get out of the bungalow safe? Let us know your thoughts in the comments below.

Phulpakhru 23 May 2019 Preview: Revati Asks Sameer To Leave Her Office

Ek Ghar Mantarlela 23 May 2019 Preview: Nilay Finds Out That The CCTV Footage Is Deleted