Kiran Mavshi saves Gargee's mother and tells her to search for something that is in the house but does not belong to them. 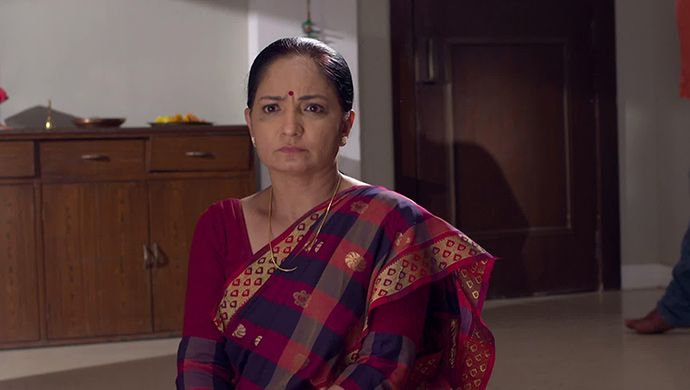 In the previous episode of Ek Ghar Mantarlela, Gargee’s mother decides to stay back at home as Gargee, Baba and Kiran Mavshi go to have ice cream post dinner. Her mother experiences weird things happening around her and one such instance includes seeing her self in front of her. Next day she talks rudely with Gargee and tells her to bring Kiran Mavshi. In the bungalow, Kshitij gets a call from Sameedha and tells him that she visited the bungalow the previous night and for a few days, she is going out of station for some emergency work.

In tonight’s episode, Gargee comes back home, gets angry on her mother but then remembers the incident that happened and calmly requests her to go and meet Kiran Mavshi. Her mother then starts walking but stops in between, Gargee sees her and asks her why did she stop. Her mother then gets angry on Gargee and tells her in a loud voice that she doesn’t want to go to Kiran Mavshi as she doesn’t come to their home. While this happens, Kiran Mavshi comes at the door and calmly calls Gargee’s mother and takes her to her house. Kiran Mavshi then tells Gargee to look for what she was told.

At the Mrutyunjay bungalow, the gramophone starts playing on its own and a shadow of a lady passes by. Gargee who is desperately searching for something hears the music of the gramophone. Just then she hears the sound of the vermilion box rolling near her. She then bends down and finds the vermilion box and takes it out. Gargee is about to open the box but then Kiran Mavshi calls her from behind and tells her not to open the vermillion box and asks her to keep it near the pooja place.

In the next scene, we see Sameedha who is sitting in the Mrutunjay bungalow is looking furious about something. While this looks scary, will she send something else at Gargee’s house as the vermilion box is already kept near the temple? Let us know what you think in the comments below!