In tonight's episode, Mavshi enters Gargee's mother's bedroom and sees her talking to someone. 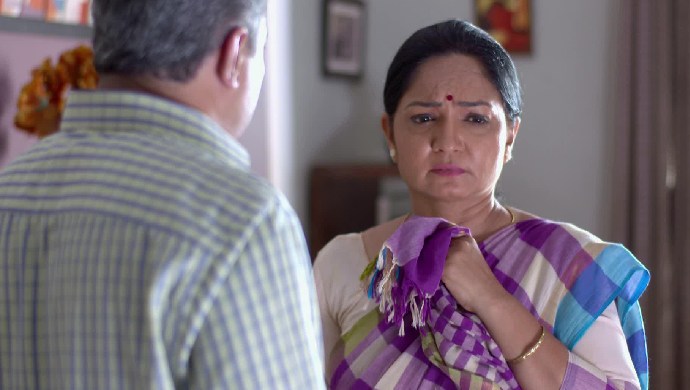 In the previous episode of Ek Ghar Mantarlela, Gargee asks Mavshi, if they got any useful information after meeting the lady who used to work at Purudanda’s. The latter lies to her that, all the evil things that used to happen stopped after Purudanda’s death. Before Gargee could ask anything, she requests her to leave the topic. Gargee’s mother gets discharged from the hospital but starts having a headache after coming home. Kshitij’s aunt scolds Vaiju for being careless.

At Mrutyunjay bungalow, Vaiju tells Kshitij and his aunt that she couldn’t find the idols of God. Hearing this, the aunt gets angry and upset. Kshitij tells her that God is everywhere and if she wants to pray to him then she can do it anywhere, with or without his idols. Later, Kshitij gets ready to go to the hospital and calls Vaiju to bring the tiffin. As usual, Vaiju is unable to hear him, which makes him angry.

At Gargee’s place, she takes her mother to the bedroom and asks her to have soup. Later, Gargee hears Mavshi calling her from another room and goes out. The lady who was seen in the Mrutyunjay bungalow comes near Gargee’s mother and helps her to drink the soup. The latter thinks that it is Gargee and talks to her while drinking the soup. When Mavshi enters the bedroom, the lady vanishes and Mavshi sees Gargee’s mother talking to someone and gets suspicious. She then checks the soup and gets a foul smell.