While Gargee's parents have come to the market to buy fruits, Sameedha meets them and offers to have tea with her. 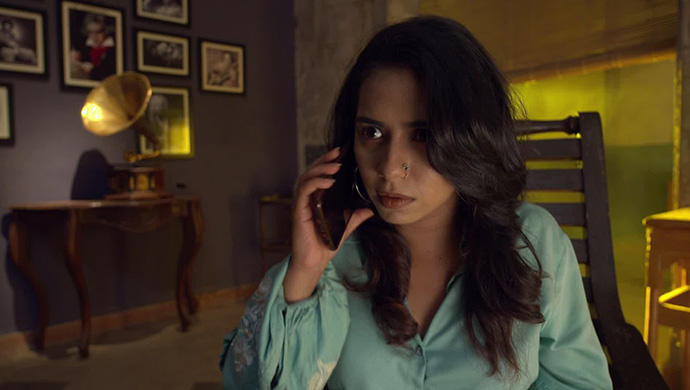 In the previous episode of Ek Ghar Mantarlela, Sameedha gets a phone call from Kshitij as he informs her about his plan to renovate the Mruyunjay bungalow. At the office, Gargee convinces Cedric to help her solve the mystery of Mrutyunjay. Later that day, Pakya plays a prank on Nilay by acting as if he is dead. When Nilay gathers other people, Pakya starts laughing. Knowing that Pakya has played a prank on him, he slaps the latter in front of everyone.

In tonight’s episode,  Pakya is still upset about the incident. Gargee, Cedric and Ruchita try to console him. Before going home, Gargee asks Cedric if he was able to get the information about the little girl whom she asked him to follow. Cedric tells her that he has already mailed it to her.

Gargee’s parents have come to the market to buy fruits and vegetables that are needed for the pooja. While buying fruits, one of the apples falls down and goes near a lady. The lady picks it up and comes to Gargee’s parents to give it back. This lady is Sameedha who tries to have a conversation with Gargee’s parents and also offers them to have tea with her. Gargee’s father agrees to it.

Nilay calls Gargee to talk to her about the series of incidents that are happening with him. But when she receives the call he decides not to tell her and disconnects the call. Gargee gets surprised by his behaviour and rings the doorbell of her house. Seeing that no one is opening it, she goes to Mavshi’s house. While she is there, she again gets a call from Nilay. Since Gargee is in the washroom, she asks Mavshi to receive it. Upon picking up the phone, Nilay starts telling her that from the past few days, he is having weird experiences. Mavshi chooses to stay silent till he completes and in the end tells him that Gargee has gone to the washroom and she will ask her to call him back.

Why is Nilay experiencing such things? Let us know your thoughts in the comments below.

Watch Date With Saie A ZEE5 Original Starring Sai Tamhankar, Which Revolves Around The Popular Actress Who Is Stalked By A Maniac

Phulpakhru 31 May 2019 Preview: Who Is Baba Chatting With Late At Night?

Ek Ghar Mantarlela 31 May 2019 Preview: Will Gargee Go To The Bungalow?