Ek Ghar Mantarlela 4 May 2019 Written Update Of Episode: Is Jakhoba Sent By Kshitij?

Jakhoba tells everyone that he has been sent by the owner of Mrutyunjay bungalow to help Gargee and team to carry on their search. 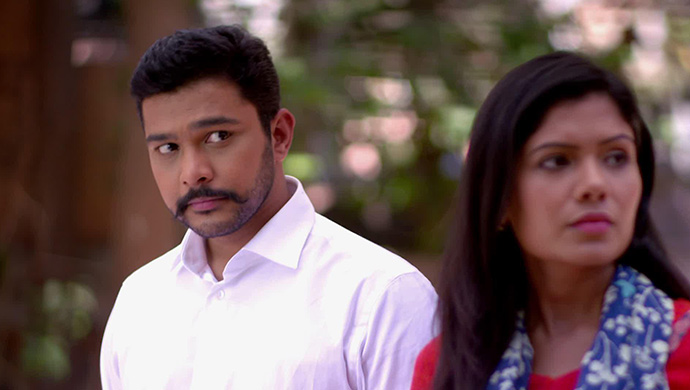 In tonight’s episode of Ek Ghar Mantarlela, Nilay and team play a prank on Pakya by turning off the lights. When he is about to leave the house, all of them show up and start laughing at him. A few moments later, Dinesh comes in the bungalow and tells everyone that even he is a part of the show and that is why he has come there. But Nilay sees his phone getting Sara’s call and gets angry on him and tells him to go away. Later, Nilay and Cedric try to fix the light but see that the fuse is missing.

In the preview of the next episode, Gargee sees a red light coming through a window. She shouts tries to call everyone but nobody is able to hear her. Everyone tells her that they did not hear her though they were in the next room. While waiting outside the bungalow, Dinesh gets a call from Sara and she asks him if he was able to get in the bungalow, but he tells her that Nilay has asked him to leave just because Sara called him at the wrong time. While talking to Sara, Dinesh sees a man with a lamp and gets scared and runs into the bungalow.

Gargee and team hear Dinesh’s voice and open the door, he gets in and points his finger towards an old man who is standing in front of the bungalow. The old man tells his name is Jakhoba and the owner of the bungalow has sent him to help Gargee and her team. Gargee allows him to come inside the bungalow and following him Dinesh also gets in. But Nilay picks him and tells him to go away as he won’t allow him to stay in the bungalow.

Nilay and team are confused if they did the right thing by allowing Jakhoba because he could create problems in their search. While they are talking, the electricity is back and after going downstairs they see that Jakhoba has fixed it. Upon asking how did he do that, Jakhoba says that he has been in the bungalow since he was 15 years old and since then he has been serving his owner. Nilay asks Jakhoba what happened to the bungalow and the people who stayed here. He tells everyone that the owner’s wife was pregnant when she attempted suicide.

The presence of Jakhoba will create a problem or will he be helpful for the team? Find out in the next episode.

Watch The Sholay Girl is a ZEE5 Original film based on the life and struggle of Reshma Pathan.

Watch Kedarnath The Movie Based On The Real Incident Of Uttarakhand Floods.

Phulpakhru 6 May 2019 Preview: Manas Gets Surprised After Seeing Vaidehi At RBK

Ek Ghar Mantarlela 6 May 2019 Preview: Jakhoba Wants The Team To Listen To The Story