In tonight's episode, Kshitij remembers that Mavshi had given him two Kakan's to distract the Purudanda's. He uses one of them to distract Sameedha. 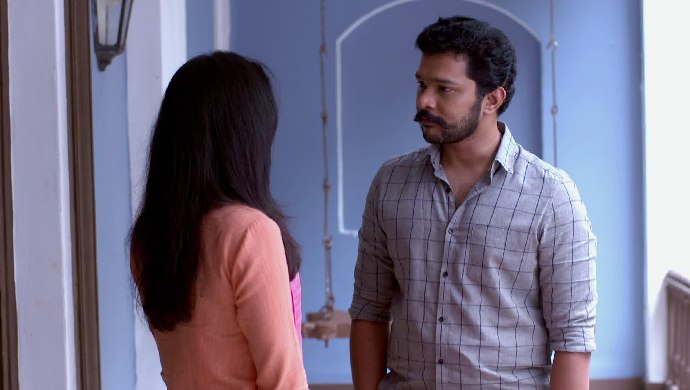 In the previous episode of Ek Ghar Mantarlela, Mavshi gives the holy Kakan to Kshitij and tells him that it will save Gargee from the evil spirits. She also gives him the holy thread and asks him to tie it on Aakash, Sakshi and Sameedha’s hands so that they won’t be possessed any more. In the next scene, Gargee is seen lying unconscious on the floor. Aakash, Sakshi and others are about to kill her when Kshitij comes there and stops them.

In tonight’s episode, Kshitij ties the holy thread on Sakshi and Aakash’s hand so that the spirit of Nana Purudanda won’t be able to control them anymore. Kshitij is about to reach Gargee when Sameedha comes there and pulls him back. He tries to get rid of her and while doing so, the Kakan slips from his hand.

Later, Kshitij accepts his defeat and lies on the ground. Sameedha sees that Kshitij does not have the Kakan anymore and feels that he is no more a threat to them. Just then, Kshitij remembers that Mavshi had given him two Kakans to distract the Purudandas. He quickly takes out the real Kakan and puts it in Sameedha’s hand. After wearing the Kakan, Sameedha gets back to her senses and Kshitij asks her to destroys the idol of the evil.

With this, Kaveri’s spirit vanishes and Gargee is saved. After this incident, everything gets normal. Mavshi tells Gargee that her father is at home and is safe. Aakash and Sakshi apologise to Gargee for whatever happened. Sameedha comes to Gargee and calls her Tai.

Later, Gargee searches for Kshitij and Mavshi tells her that he is standing outside the house. She then goes out and says thanks to him for saving her life. In return, Kshitij asks Gargee if she will allow him to stay in the bungalow. Both of them become friends at the end.

For more entertainment, watch the love story of Vaidehi and Manas in Phulpakhru.

Are You A Fan Of Bhau Kadam? Then You Must Watch Nashibvan