Mavshi tells Nilay that he is Gargee's protector which is why whenever he is around her she is safe. 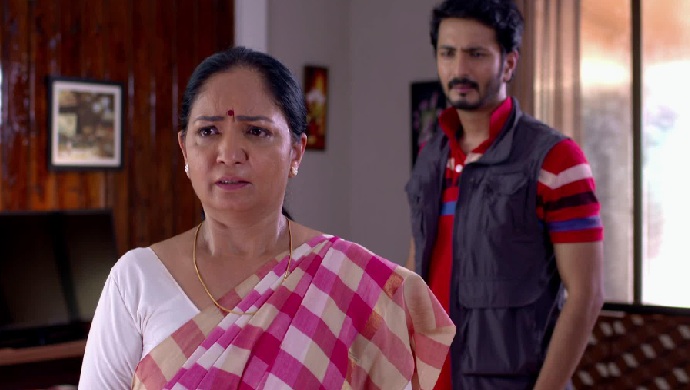 In the previous episode of Ek Ghar Mantarlela, Gargee thinks that Nilay played a prank on her by telling her about his mother’s death. Mavshi is aware that he didn’t lie, she then suggests him to go on a vacation. Later that day, Kshitij comes to Mrutyunjay bungalow and asks Sameedha to present the architecture designs. She holds a plain paper in her hand and the moment she keeps it in front of him, the design appears miraculously.

In tonight’s episode, Kshitij meets Gargee near her office and tells her that he was about to go to their office to inform about the defamation case on their news channel. She tells him that she might have not been able to prove it yet but she will definitely prove that there is something unusual in the bungalow soon. While talking to her, Kshitij sees his brother standing on the other side of the road. Surprisingly, he is the same guy whom Gargee saw in the bungalow.

Later that day, Nilay comes at Gargee’s house to apologise to her parents. Her mother tells him that he should rather apologise to Gargee as she is upset with his behaviour. When Gargee’s mother goes out, Nilay questions Mavshi that why is it happening to him and how will he be able to come out of this madness. The latter reveals that he is the protector of Gargee which is why he is experiencing such things. She asks him to remember the time when he was in the bungalow and everyone including Gargee was safe but the moment he stepped out, she got into trouble.

He asks her about Gargee’s relation with the bungalow and who wants to kill her. Mavshi chooses to keep it as a secret and tells Nilay that she will tell it to him at the right time. Till then, she asks him to be with Gargee and make sure that she does not meet the people she saw in the bungalow.

Will Nilay believe Mavshi or will he keep a distance from Gargee? Let us know your thoughts in the comments below.

Phulpakhru 8 June 2019 Preview: Manas Late For The Party Because Of Revati?