Mavshi tries to convince Gargi to stay back home but Gargi doesn't listen to her and joins office. 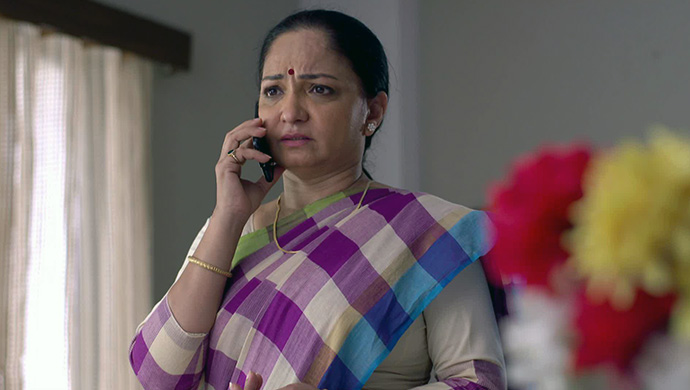 In the previous week of Ek Ghar Mantarlela, we saw Gargi returns from the hospital and thanks her colleagues for being there with her family. Mavshi and Gargi’s mother tell Gargi to listen to them and avoid such places. Mavshi then goes near the Mrutyunjay Bungalow and when she is about to knock the door a police officer stops her asks her what is she doing near the bungalow so late. Mavshi then lies to him saying she doesn’t know how did she come here. The police officer gets a call and comes to know that Samidha has left the hospital as she got discharged. He then gets angry on the on-duty officers for their irresponsible behaviour. He leaves from the place and tells Mavshi to leave.

Watch the Week in Short below:

Late at night, the lights of the Mrutyunjay bungalow start blinking and we see a person is sitting on the chair and watching TV. The person vanishes and Gargi realises that it was her dream. Next morning, we see a lady calls at Kshitij Nimbalkar‘s office but upon asking her name, she doesn’t reply and cuts the call.

Next day, Nilay comes to see Gargi at her house. Gargi’s mother inquires Nilay about his family, seeing this Gargi gets awkward and tries to avoid the topic by sending her mother to the kitchen. Nilay then tells her that the team is all set for the new show and they are waiting for Gargi to join office.

In the next scene, Mavshi is seen talking to someone about Gargi joining the office and she tries to convince Gargi against joining office so early. She also tells the person to meet and talk further. Kshitij is driving his car and suddenly sees someone sitting in the backseat of his car. He turns back to see who it is but there is no one.

What do you think is going to happen next? Whom is Mavshi talking to? Keep watching to know more.

If you want to watch something lighter after a horror show, watch comedy chat show Chala Hawa Yeu Dya.