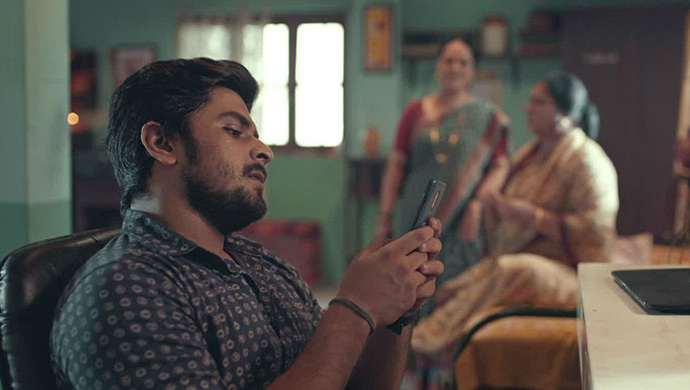 Zee5 Marathi Original Series Kaale Dhande is a new concept that has been brought to the digital space. The ZEE5 original Marathi series, released on 2nd October, featured Mahesh Manjrekar is his digital debut. It also marks the digital debut of the actor Shubhankar Tawade, who is seen in the lead role, as Vicky. The series tells the story of a budding photographer Vicky, who falls into trouble when he accidentally gets involved with a mafia gang. Kaale Dhande recently won the award for best original series in the month of December, at the High Five at ZEE5 event, that was held last night.

Watch the promo of the series here.

Here is our exclusive, candid conversation with Shubhankar, where he opened up about his experience on working in the bold, path-breaking series, his college days and more.

1. What went through your mind when you first read the script of Kaale Dhande?

I received an audio clip and a mail of the narration. For the entire duration of 45 minutes, I was laughing because it was so hilarious. My parents were sitting right next to me and even they were interested in it. Though it is adult content, the interest that it sparked, made me realise, that this is perfect for me. I just thought that if two generations are interested in this, it is definitely something I should do. It is quite relatable.

2. The content is really bold and new for Marathi Cinema. Were you apprehensive about how the audience would receive it?

Yes, I was apprehensive, but I was also keen on bringing new content to the Marathi industry. We have these concepts in all different industries, be it English, Hindi or the regional ones, so why not Marathi? Somebody must take that step and take the risk of doing it. So, when this opportunity came to me, I just thought I must jump on board and see how it goes. Everybody was being skeptical about it but thankfully, the audience accepted this concept so nicely. From the day of the release, until today, I am receiving appreciation messages and mentions every single day.

3. How was your experience on set, while shooting bold scenes? Was it a little awkward?

Not at all, because the crew and cast were filled with young people. The director, Ramchandra, is a year older than me. Even the senior actors are really young at heart. Working with Nikhil sir and Mahesh ji (Manjrekar) was amazing. We actually looked up to them. But on set, we were more like friends, we used to gossip and play pranks. That was the whole atmosphere on set. As a result, it became quite easy to work on a project like Kaale Dhande.

4. What was your experience like, working with Mahesh Manjrekar? Did you seek any tips from him?

He’s not someone who will come and tell you how you must act. People must learn from you by observing you and this is what I did. I watched him and adapted the skills. His personality and aura are quite intimidating but he is very different as a person. There is a character named ‘Technical’ in the series, who is supposedly the right hand of Mahesh Ji’s character. He didn’t have a lot of scenes or dialogues in the series. So, Mahesh ji advised him to stand next to him, so that he is visible too. He does not pull anyone down and takes people ahead with him.

5. Could you say that the webspace gives more creative freedom to actors, than other mediums?

Definitely, it gives creative freedom because, in television and films, there are many restrictions. But in the digital space, there is no filter, it’s like a mirror. It is hard to digest because it is realistic. But people are now accepting it as it is. And for actors, it is really a great thing, as they have a way of working. For actors from the theatre background like me, it definitely gives the liberty to express.

6. You have always wanted to be an actor, is that right?

I come from a family of actors, I have a background which consists of my father being the actor, my sister the producer. So I knew I was going to make a debut. However, I wanted to make it as a dancer. I was a professional dancer. I am from Ruia, and a lot of people in Kaale Dhande are from my college. We had a Natya group, in which we came up with skits, drama, and different concepts. From there, I realised I wanted to act.

7. Kaale Dhande is a comedy series; what are the other genres do you want to work in?

I really like Sci-fi thrillers and serious drama stuff. Currently, I am doing a film that has a character with a strong personality, which challenges me as an actor and helps me realise my potential.

8. Your character in Kaale Dhande lands into a lot of trouble. Any such incidents from your real life that you’d like to share?

(Laughs) The character that I am playing, Vicky, resembled me, from several years ago. I felt like I could relate to the character. Everything that happens in the show has happened [with me] in real life, during the college period. Though I have never been caught by my family, I have been caught by the police many times. But that happens with most people, and I have lived that kind of life. This is why I could feel that there was a similarity between Vicky and me and I could portray it so nicely.

We think that actor has portrayed the role of Vicky, wonderfully. Agreed? Let us know your thoughts in the comments below. Watch all the episodes of Kaale Dhande, only on ZEE5.