From Titeeksha Tawde To Gauri Kulkarni, Check Zee Yuva Actresses Who Slayed In A Saree!

Here are some style lessons which you can take from these actresses. 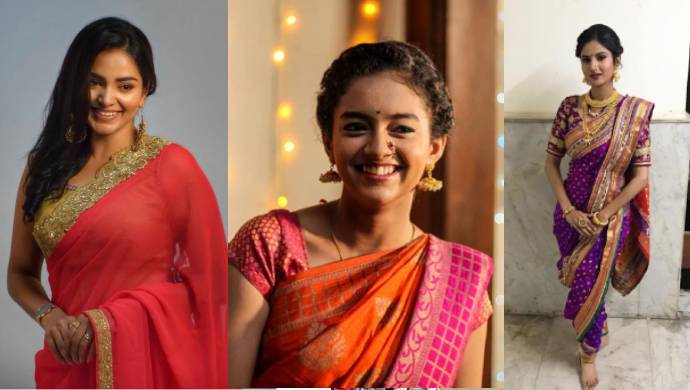 It is always nice to see our favourite actresses from the Zee Yuva serials donning traditional avatar during the festivities. Now, with all the modern trends which are emerging, we see these actresses give their own twist to this traditional garb which is adored by our previous generations.  For example, Hruta Durgule of Phulpkahru styled the saree with a glittery blouse while Tu Ashi Jawali Raha’s Titeeksha Tawde opted for a Nauvari. So, we decided to take this opportunity to show you how each of them gave their unique touch. Have a look!

Sharayu Sonawane from Prem Poison Panga opted for a fuschia pink saree with a green blouse. She went heavy on the jewellery by wearing a tanmani and bazuband amongst others. Sharayu looked like a beautiful Indian bride while donning this avatar.

The Almost Sufal Sampoorna actress Gauri Kulkarni opted for a warm-toned saree which had striking patterns on it. While she carried the outfit gracefully, it was her smile which stood out the most.

Wishing the goodness of this festive season dwells within you and stays throughout the year. Happy Diwali!! . . #zeeyuva #almostsufalsampurna #gaurikulkarni

Time and again, Hruta leaves amazed with her breathtaking beauty. This time too the actress charmed is in a beige saree and black shimmery blouse as her wavy hair fell upon her shoulders. We also loved the subtle highlights which added more depth to her hairstyle.

Whenever we see the Tu Ashi Jawali Raha actress Titeeksha Tawde, we prepare ourselves to admire her fashion sense. We were lucky to catch the actress in a traditional Nauvari saree while her hair was tied in a bun and adorned in a gajra.

Just like Titeeksha, Saajana’s lead Pooja Birari chose to opt for a Nauvari which had a heavy gold border. We rarely get to see Pooja so decked up since, in her character on Saajana, the actress is caught with minimal makeup.

Toofan Aalaya !! 🍃🌪⚡️ Performance at @zee24taas Don’t forget to watch this show and my performance on 29th December 2019 at 8pm on zee24taas @zeeyuva thank you for this opportunity 😊❤️

Which is your favourite look from the ones above? Let us know your thoughts in the comments below.

Doctor Don: Signs Which Prove That Kabir Is Falling For Radha