Manva From Tu Ashi Jawali Raha Shows Us The Real Bond Between The Cast!

Titeeksha Tawde, who plays this character, showed us the relationship between these actors! 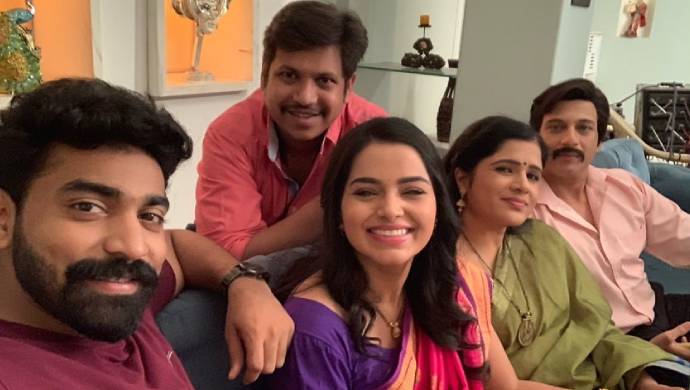 Titeeksha Tawde, popularly known for Manva’s character, has to suffer thanks to her onscreen husband Rajveer. Although they both make a great pair in Tu Ashi Jawali Raha, Rajveer’s possessiveness can become a difficulty in their relationship. He has tried and almost successfully managed to separate Manva from her parents and her sibling. As distressed as she is in her onscreen relationship Rajveer, her real-life is way far from it. Meaning, Titeeksha gave us a glimpse into what the atmosphere looks like when the cast is not shooting. Luckily, we have the details, check below!

Watch the episode of Tu Ashi Jawali Raha below:

The Tu Ashi Jawali Raha actress has quite a bit to deal with when it comes to Rajveer. However, when the cameras go off, the actress showed us she just as fun-loving as the other cast members while shooting a video together. In the video clip uploaded on Instagram, we see Titeeksha with co-star Bhakti Ratnaparkhi, who plays Kaku’s character, engrossed in their silliness. From the post, it looks like Titeeksha is supposed to take a Boomerang, but ends with a blooper video altogether.

Few things can bring out kids inside these adults… boomerang is one of them 🐒 How they are ready to do anything to make a funny boomerang! @netraakula @ruturajphadke @vaibhav_kelkar @janhavipanshikar @amol.bawdekar @amrutamalwadkar @bhakti6356 what are you guys upto??? #tuashijavaliraha #zeeyuva #bts

Amongst all this, the most surprising aspect was seeing Kaka, essayed by Amol Bawdekar, take a break from plotting against Manva and get along with her. The only person seemed to be missing was our leading man of the show Siddharth Bodke (who is America for his play Ananyaa). We loved seeing the whole Tu Asho Jawali Raha family come together for this!

What are your thoughts on this show? Let us know in the comments below.