Nachiket, Digs Or Appa – Who Is Your Favourite Male From Almost Sufal Sampoorna?

Let us know which one is your favourite by voting below! 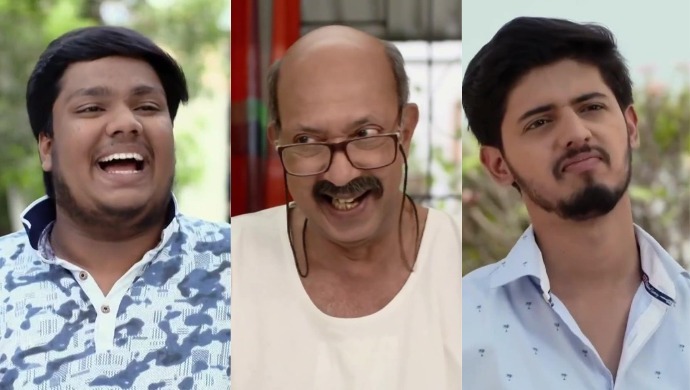 Zee Yuva’s comedy family drama Almost Sufal Sampoorna has a perfect blend of characters. The show revolves around Nachiket and Sai’s love story and their continuous struggle to keep their affair a secret from the latter’s strict and orthodox family. There are three male characters on the show- Appa, Digs and Nachiket. Appa- who is Sai’s stubborn grandfather- has weird principles and rules that he forces on everyone in the family. Digambar aka ‘Digs’ on the other hand is Nachiket’s best friend. He is a mischievous and carefree lad who supports Nachiket through thick and thin.  And the main character Nachiket is a dependable, honest and chivalrous man who stands by Sai and helps out her family when in need.  But the big question is, who amongst them is your favourite? Let’s have a look at them in detail.

We all know Nachiket Deshpande as a mature, intelligent and spirited young lover. He goes to all possible extents to make his beloved Sai happy and also rescues her family from many problematic situations, every chance he hets. Nachiket also has a goofy side; we often see him playing pranks on Sai, tricking Appa, etc. We can surely say that all of these qualities make Nachiket a complete package!

Appa is a selfish, stubborn and arrogant old man. He despises Nachiket but indulges in sweet talk with him when in need. Appa is quite cunning in his ways and does not hold back from enforcing his meaningless principles on others. His greed and egoistic attitude often land him in trouble. But his bull-headed personality stops him from changing for good. However, love him or hate him, you can’t ignore him! Appa may have his flaws but one can’t deny that he makes the narrative extremely interesting with his devilish ways. After all, every story needs a hero as well as a villain right?

Digs is to Nachiket what Jai is to Veeru. No matter what, Digs stands by Nachiket and doesn’t let him down. He is Appa’s biggest rival as he leaves no chance to tease and harass the latter by calling him, Hitler. Digs is carefree, happy-go-lucky and Nachiket’s solid support system. Digs has a crush on Richa and tries many tricks to woo her but the latter finds every excuse to avoid and ignore him.

These fun-loving and interesting characters have been entertaining us throughout the journey and so, we have created a poll for you to vote and make your favourite character win. Which of the above characters is your favourite? Let us know by voting below!

Nachiket, Digs Or Appa- Which Is Your Favourite From Almost Sufal Sampoorna? Vote!
Don't Miss

Madhura And Kumu Mavshi Are Best Friends In Real Life?