The Phulpakharu actor has an extremely filmi love story. Read on to find out! 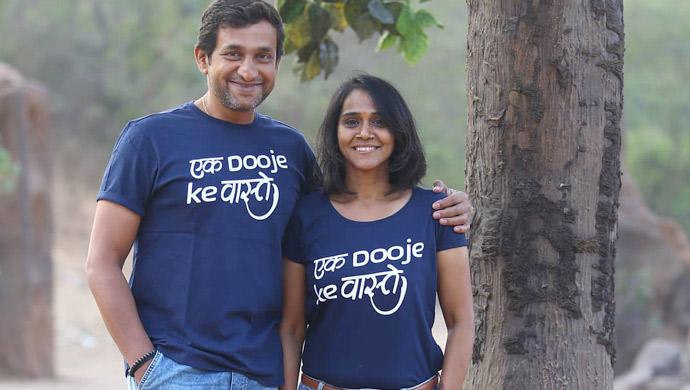 Prasad Oak is one of those actors from the Marathi film industry who has worked really hard to reach where he is today. Popularly known for playing the character of Harshavardhan Bhosle on popular show Avghachi Sansar, the actor is now entertaining the audience with his portrayal of Anil in Zee Yuva’s Phulpakharu.

Watch one episode of Phulpakharu below:

Apart from this, the actor also has an interesting love story in real life. Yes, you read that right. Recently, Prasad and his wife celebrated their 21st anniversary. Prasad met the love of his life Manjiri during while he was taking acting classes. The actor has also posted a picture on his social media. Take a look:

Manjiri was interested in acting so she contacted one of her friends Sadanand who happened to be Prasad’s brother. Both Manjiri and Prasad were working together for a play when Manjiri started falling for the actor. Later they met each other’s parents. Initially, Manjiri’s parents did not agree as they did not like Prasad. But gradually after knowing him, they accepted the Phulpakharu actor and the couple got married on January 7, 1998.

Prasad’s parents did not approve of their marriage and the couple faced a lot of problems. While talking to a leading daily Prasad shared a few memories of those hard times when they could afford only a one-time meal, but the couple decided to continue their fight. Now when the actor is successful and enjoys a huge fan following.

The most surprising thing about their love story is that they haven’t proposed to each other. Well, we believe they were just meant for each other.

Do you have a story similar to the actor?

If you are a fan of the actor and his work, watch his show Avghachi Sansar streaming free on ZEE5.

If You Enjoy Docudrams, Watch Tigers Based On A Real Life Incident

Liked Sai’s Style In Date With Saie? Here’s How You Can Get Her Looks!

Vartul: Tejas To Reveal His Real Identity To Meenakshi On Holi?