Phulpakhru 10 May 2019 Written Update Of Full Episode: Sameer To Perform With Manas

After knowing their drummer has met with an accident, Manas suggests Sameer's name. 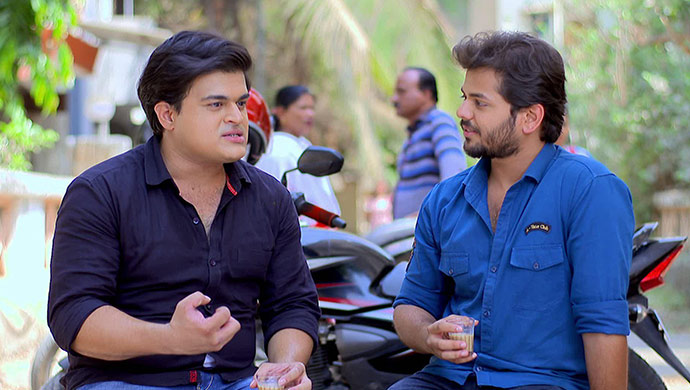 In the previous episode of Phulpakhru, Tanya and Vaidehi go to Shubham’s office as it and Vaidehi gives him a tight slap for doing such cheap things. Next day, at the office, Vaidehi tells everyone that she has come to know about the culprit but she still wants to give him one last chance to confess his mistake till lunch time. If he doesn’t do it then she will announce his name before everyone and call the police.

In tonight’s episode, at RBK, everyone is rehearsing for their live performance and Revati comes there with bad news.  She tells everyone that the drummer who was going to play the drums has met with an accident which is why they don’t have a drummer now. While Revati is speaking, Manas gets a call from Sameer and seeing his name, Manas realises Sameer is also a great drummer. He then suggests his name to Revati. She then asks him to call Sameer urgently so that they can finalise him.

Shubham gets a call from the person and tells him how Vaidehi is about to announce the name of the culprit. Shubham consoles him that he need not worry about anything because he will take care of it but he warns the person to not go and tell Vaidehi as she is playing a game.

At office, Vaidehi tells her employees to confess if they have betrayed her but no one comes to her. She then finally calls everyone and blames Abhishek for betraying her and tells him that he should give his resignation immediately else she will call the police. He pleads to Vaidehi saying he has not betrayed her but Vaidehi doesn’t listen to him. She then asks everyone to leave except Abhishek.

Sameer tells Tanya that he will be performing for RBK with Manas. Listening to this, Tanya is happy and starts choosing dresses. She then tells Sameer that she should also look good as she is his fiancee. Sameer gets surprised and tells Tanya that the word she used means either both are going to get married or engaged but Tanya and Sameer haven’t decided anything on that topic so she should avoid such words.

A few moments later, everyone comes to the room and all of them have dinner together. At night before going to sleep, Manas gets a call from Revati and she asks if everything is according to the plan. Manas assures her that everything is according to the plan and they are sure to rock the performance. While is talking, Vaidehi gets a call from a person and he tells her something that shocks her. She then tells the person that they will discuss the topic the next day in office.

What news did Vaidehi get? Keep watching to find out.

Phulpakhru 11 May 2019 Preview: Manas Tensed About His First Live Performance?