Phulpakhru 12 June 2019 Written Update: Aai And Baba Write Letters To Each Other

Manas' plan to resolve Aai and Baba's fight works out and they both start writing letters to each other. 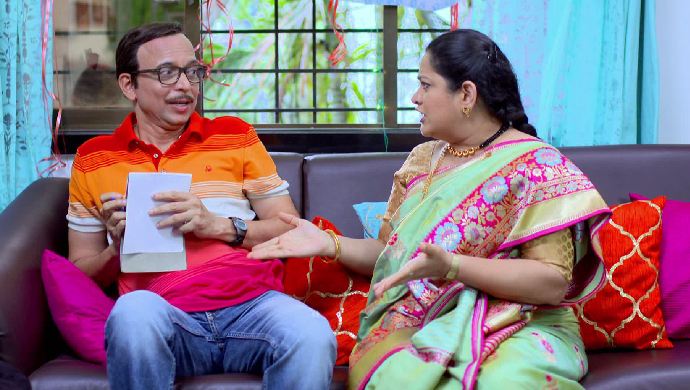 In the previous episode of Phulpakhru, Vaidehi convinces Aai to join the birthday party. After cutting the cake, Aai offers a piece of cake to Baba but thinking about the diet he looks at Sulu. This annoys her and she walks to her bedroom again. Later, Baba’s friends ask Sulu about her fitness secret. She tells them that she loves to exercise daily and they too should do it. Immediately Baba gets an idea and asks his friends to do some pushups.

In tonight’s episode, Manas comes up with a plan to resolve the dispute between Aai and Baba by asking them to write letters to each other. He tells Sameer that he has to keep Sulu busy and make sure that she is away from Baba. He gives Atya and Vaidehi the responsibility to convince Aai to write a letter to Baba and he and Tanya will go and ask Baba to write a letter to Aai.

According to the plan, Sameer goes to Sulu and tells her that he wanted to talk to her about something and takes her out of the house. When Baba’s friends leave, Manas and Tanya ask him to write a letter to Aai asking her to come downstairs. Similarly, Vaidehi convinces Aai to write a letter to Baba. When both of them read each other’s letters, they get happy and continue to write another. Just then Atya gets curious to read what is written in the letter. Baba tries to hide it from her throws the letter out of the window.

The letter falls on Sulu and she gets surprised after reading it. She comes to Baba and asks him what’s the matter. He explains to her that it fell on her by mistake and it was meant for Aai. Upon asking the reason for writing letters to each other, Baba tells her that Pratibha (Aai) is angry with him. Sulu decides to resolve this matter and tells Sameer to call Aai immediately.

Madhura And Kumu Mavshi Are Best Friends In Real Life?