Manas' mother is upset because of husband's friend Sulochana. Atya decides to get Vaidehi's help to find her through the internet. 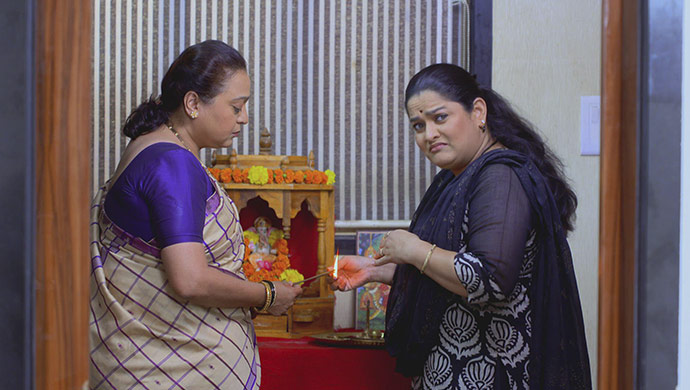 In the previous episode of Phulpakhru, Sameer is trying hard to woo Revati by giving her flowers and flirting with her. At home, Atya after hearing crows rattle, tells Manas and Vaidehi that it is a sign of guests. Even after waiting for the whole day she does not lose hope and waits for the doorbell. Later at night, Manas’ mother comes home and seems disturbed.

In tonight’s episode, Manas’ mother tells Atya that she is upset because of Manas’ father and his behaviour. Just then they hear the sound of someone walking down the staircase, Atya then tells her that Vaidehi and Manas shouldn’t know about this and decide to go to her room and talk further. Vaidehi who hears this is worried about her mother-in-law and decides to hide in Atya’s room to know more.

They go to Atya’s room and Aai continues telling Atya that Manas’ father is behaving suspiciously after returning from the reunion party. He keeps on talking to a lady on the phone and that too in a low voice so that no one else is able to hear it. Atya asks her about the name of the lady and the latter tells her the name of the lady as Sulochana. Surprisingly, even Atya knows her and the moment she hears her name, she starts telling about how beautiful she was and Aai feels even worse.

After Aai goes out of the room, Atya catches Vaidehi who was hiding behind the curtain. She then tells her that she will forgive her only if she helps her in finding the details of Sulochana. Vaidehi comes to her bedroom and tells everything to Manas. He decides to call his father and question him about Sulochana. His father tries to hide it from Manas but ends up revealing the information.

Will Vaidehi and Atya find the real Sulochana? Let us know your thoughts in the comments below.