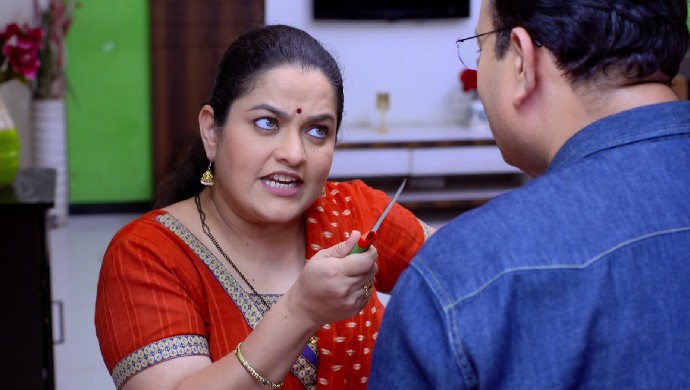 In the previous episode of Phulpakhru, Revati comes out of her cabin and asks Manas to come to her cabin and present his new song. When he goes inside the cabin he hints Sameer to follow him to annoy Revati in which they are successful at. Next day, Manas and Vaidehi discuss about Atya and how she might be feeling alone. Manas says that she will meet someone in her life who will make her feel important and love her. Just then, we see a man in his 40s getting down from his car and asks for Rege’s house.

In tonight’s episode, Revati calls Sameer in her cabin and asks him to prepare a tune without involving anyone else in it. He agrees and is about to walk out of her cabin when she tells him to sit inside her cabin and prepare the tune. Meanwhile, Manas tries calling Sameer but his phone is with Revati and she chooses not to tell him about it.

Vaidehi and Tanya go out to buy medicine from the local store. Just then, Vaidehi gets a call from Tanya’s uncle. He tells her that he has reached home. The latter asks him to go home and wait. When he reaches home, Kusum Atya opens the door and before he can say anything, she thinks that he has been sent by lawyer Sakhalkar’s office to threaten her. She immediately asks him to leave and threatens him with a knife.

At RBK, Manas sends a message to Sameer through Tarana. Later, Sameer acts as if his stomach is paining and comes out screaming in pain. Manas comes there and does something silly and the latter quickly feels fine. This drama irritates Revati and she returns to her cabin.