Phulpakhru 25 May 2019 Written Update Full Episode: Vaidehi Gets Manas’ Name In The Chit

As per Revati's suggestion, all the ladies take a chit with their partner names. Luckily, Vaidehi gets Manas' name in her chit. 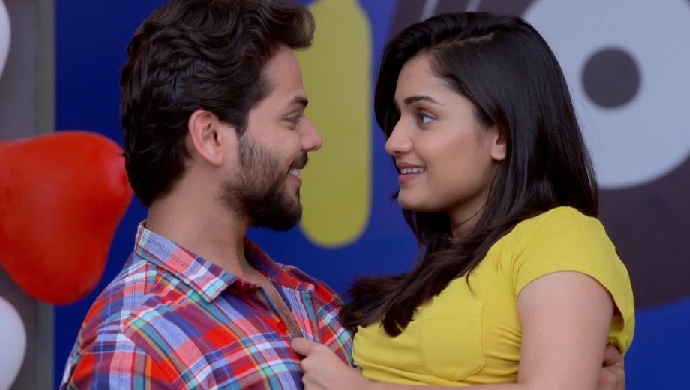 In the previous episode of Phulpakhru, Manas and Vaidehi are about to get Sulochana’s number from Baba’s mobile but he comes there and takes it back. Later that day, Manas questions Baba about Sulu. He tells him that she is his college friend and in their college days, she was the most beautiful girl. Baba then asks Manas if he will end friendship with his friends when he gets old. Manas understands Baba’s point and starts supporting Baba.

In tonight’s episode, Manas and Vaidehi reach the RBK office and meet Tanya Sameer and other team members. Everyone is excited to have fun and play games. Tarana, one of the team members tells Manas that for today they are not couple as it will be decided by the chits. While others are excited, Vaidehi notices that Tanya is afraid about not getting Sameer’s name in her chit. The latter assures her that if her love is true then she will get Sameer’s name for sure.

At home, Atya and Aai are thinking about their next plan to get Baba’s mobile. Atya then suggests her that she should behave normally with Baba so that he stops doubting everyone and it will be easier for them to get his mobile. Aai tries to do so by talking to Baba nicely and reminding him about his medicines. He gets surprised by seeing a change in Aai’s behaviour and doubts her intentions.

Back at RBK, Vaidehi gets Manas’ name in her chit and both of them get happy. Now there are only two couples are remaining and this includes Tanya, Sameer and Revati. Revati goes to pick a chit and gets Sameer’s name on it. Sameer is happy but Tanya gets upset. Vaidehi tells her to relax as it is just a game but Tanya is unable to control her emotions. They start playing the games and the first game is the shrinking island. Where a couple has to stand on a piece of cloth and balance themselves as it keeps on shrinking.

Will Tanya be able to accept Sameer playing with Revati? Let us know your thoughts in the comments below.

5 Things From Siddharth Chandekar's Gulabjaam Every Youngster Can Relate To

Phulpakhru 27 May 2019 Preview: While Playing The Game, Tanya Suddenly Falls Down