Manas meets Shubham when he goes to the hotel to meet Mr Kelkar. 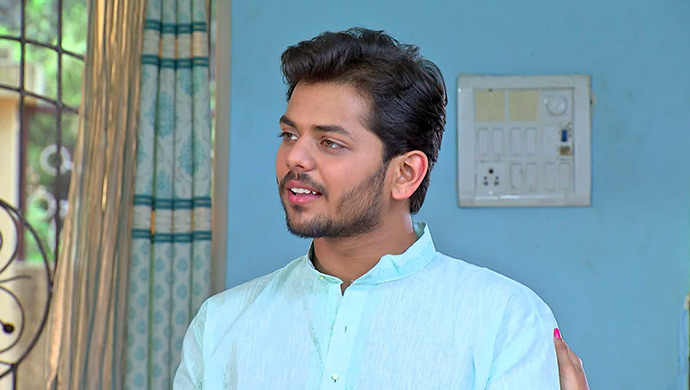 In today’s episode of Phulpakhru, Shubham calls Vaidehi but she asks Manas to answer the call as she is busy with Maahi. Manas then pickups the phone. On hearing Manas’ voice, Shubham gets confused as to what to say. He tells Manas that he has called to talk about a project. Manas then tells him that he will inform Vaidehi about his call and ask her to call back. After disconnecting the phone call, Shubham regrets calling Vaidehi. Rane then suggests him that he can change this into an opportunity.

In the evening Manas tells Vaidehi about Shubham’s call. He also tells her that he wants to do something special for her as he feels that he got the offer because of Vaidehi’s support. Manas then gifts her a gold chain and Vaidehi is surprised to see the same. Next morning, Manas makes breakfast for Atya and Vaidehi and impresses Vaidehi with his cooking. Vaidehi then tells her that he has to go to the RBK Music office as they have called him for a meeting. She also guides him to not to lose his cool while speaking to office people.

In the evening, Manas gets a call from RBK and they tell him that they want to meet him at the hotel at 4 pm sharp. Hearing this, Manas questions why they are meeting at a hotel instead of an office. The company official rudely tells him to do as asked and not get into details. Manas then remembers Vaidehi’s advice and cools down.

Later in the evening, Manas reaches the hotel for his meeting with Mr Kelkar. While going to the hotel he accidentally bumps into a person who is busy on his phone. After this, the mobile in the other person’s hand falls down and he gets angry on Manas. And, this other person is no one but Shubham.

It will be interesting to see what happens when Shubham comes to know that the person whom he bumped into was Manas. What do you think will happen next? Let us know in the comments below!

Watch The Real Life Experiences Of Celebrities Only On The Story

Phulpakhru 4 April 2019 Preview: A Lady Meets Manas Instead Of Mr Kelkar At The Hotel?