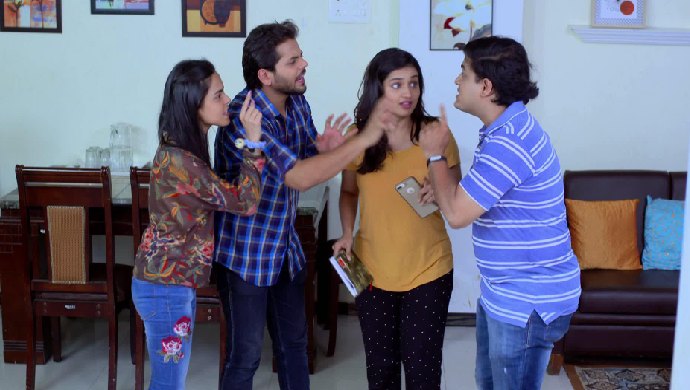 In the previous episode of Phulpakhru, Vaidehi tells Baba about a new app that can help him to track fitness. The latter agrees to it and Vaidehi smartly manages to get contact details of Sulu. Later, when Aai, Baba and Atya go out for shopping, they try calling on the number but unfortunately, they have forgotten to note down the correct last digit.

In tonight’s episode, Manas tries to guess the last digit of Sulu’s mobile number and luckily a lady answers the call. When they ask her if she is Sulochana Lavkare, she responds to it as yes and everyone gets excited. At the same time, Baba comes back home to change his t-shirt since it has got spoilt. Seeing everyone so excited, he gets surprised.

When Manas sees Baba, he immediately disconnects the call. Since he has already heard the voice of the lady, Baba questions them who the lady was as he felt that he is familiar with the voice. They somehow convince Baba by telling him that it was a video of his favourite actress. Later when Baba goes for shopping=, Manas, Tanya, Sameer and Vaidehi divide the responsibilities within them. Manas calls Sulu and tells her about Baba’s birthday and she agrees to come. Tanya and Vaidehi do the decorations while Vaidehi looks after the food preparations.

At midnight, Baba wakes up and sees Maahi besides him. He gets shocked and comes in the main hall of the house. There he sees a cake on the table and suddenly the lights turn on and he comes to know that it was a birthday surprise for him. Baba and Aai cut the cake together and everyone wishes him. A few moments later, he gets a phone call from Sulu and he walks aside to talk on the phone call. Seeing this, Aai gets angry.

How will Aai’s react after meeting Sulu? Let us know your thoughts in the comments below.

Every Girl Should Have A Boyfriend Like Vazandar's Alok

Phulpakhru 7 June 2019 Preview: Will Manas Be Able To Reach Home On Time?